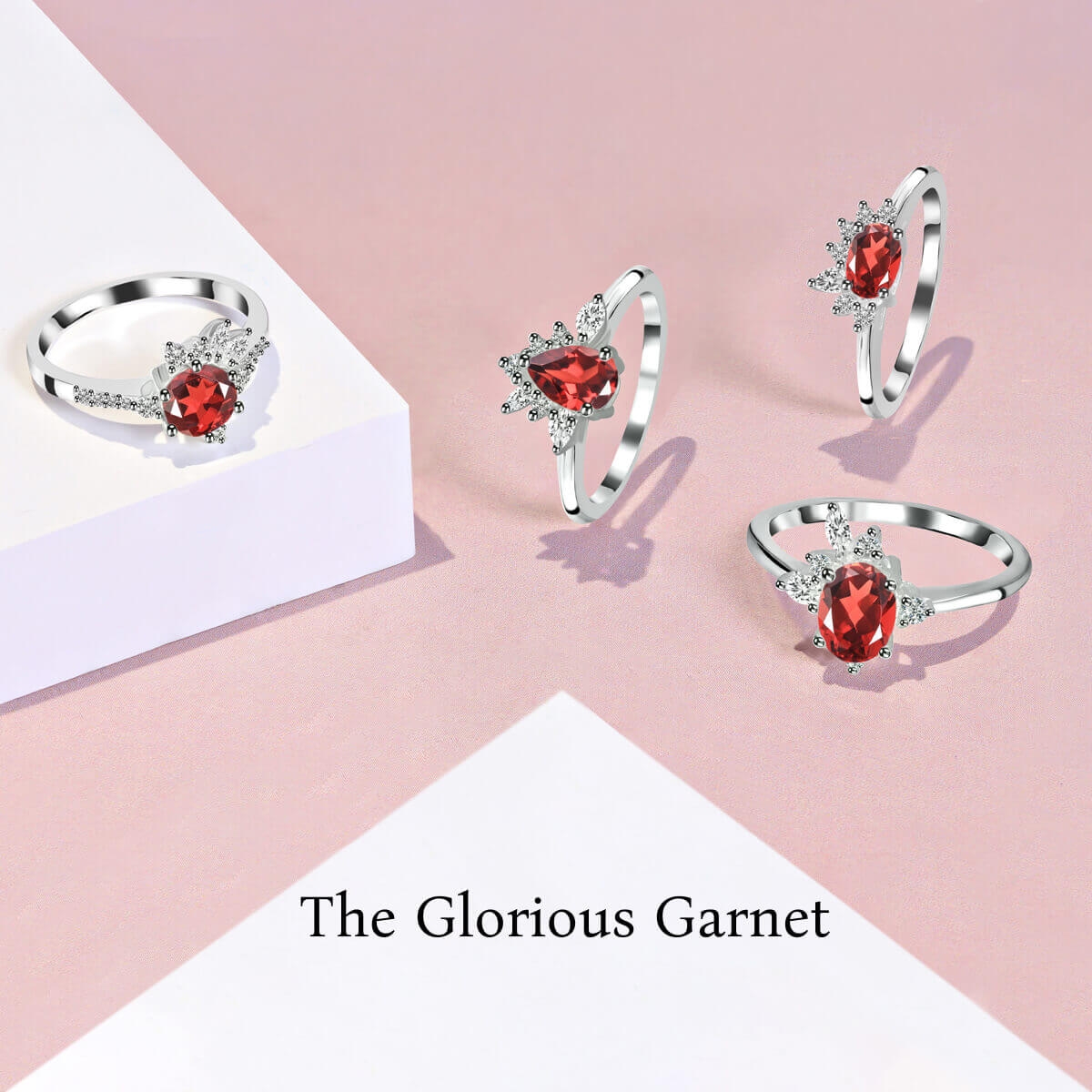 Welcoming the new year with zeal and goals is the ultimate motivation to start everything on a positive note. Pampering yourself by buying or receiving Gemstone Jewelry as a present is a next-level feeling.

Gems have evolved naturally. As per their origin, they get divided as precious and semi-precious. Since ancient times, colorful gemstones have mesmerized people due to their appealing look and superb healing qualities.

Folks wear gems per their birth month and zodiac sign, known as the birthstone. It's fantastic to know that for every month, there is a specific birthstone. Similarly, for January month it's the dark red and glossy stone named Garnet. Discover the alluring and romantic red gem with its meaning, history, properties, cost, healing benefits, and as fashion jewelry with its cleansing and care tips through this blog. 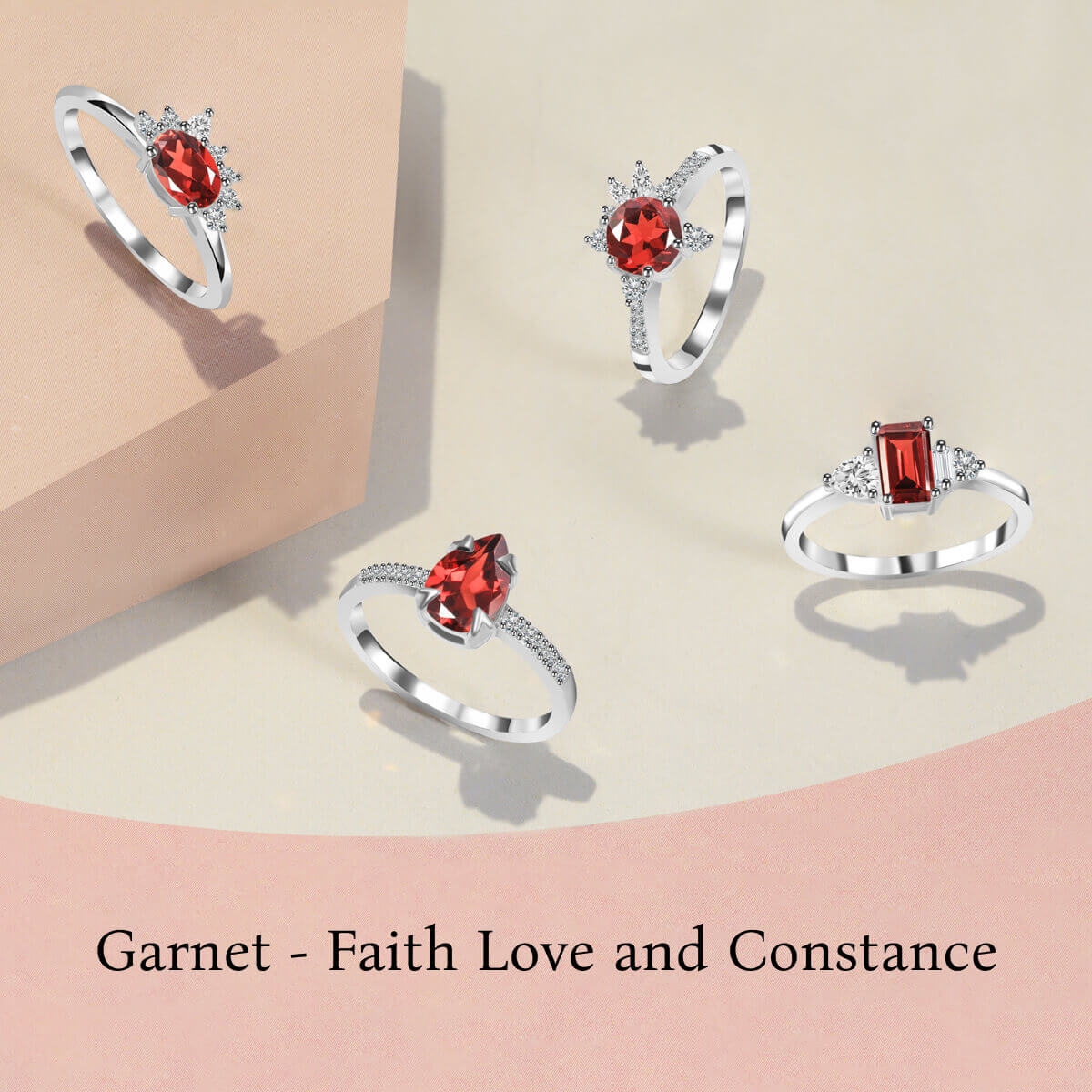 Birthstones have their importance in old-age astrology. Wearing it as per your specified birth month enables you to welcome good luck, health, and safety. For example, the month of January is the month of new beginnings.

January babies will be excited to know that dazzling and gorgeous Garnet is their birthstone. This attractive and bright red color symbolize passion, loyalty, friendship, love, and intense feelings. The January Birthstone Garnet is a pomegranate of the precious gemstone world, as it resembles red seeds in a pomegranate.

Accessories of red beauty proof got found dating as far back as the Bronze age. Its incredibly gorgeous dark red shine instantly provokes the soul. Garnet is a durable gem. One can discover Garnets all over the World. 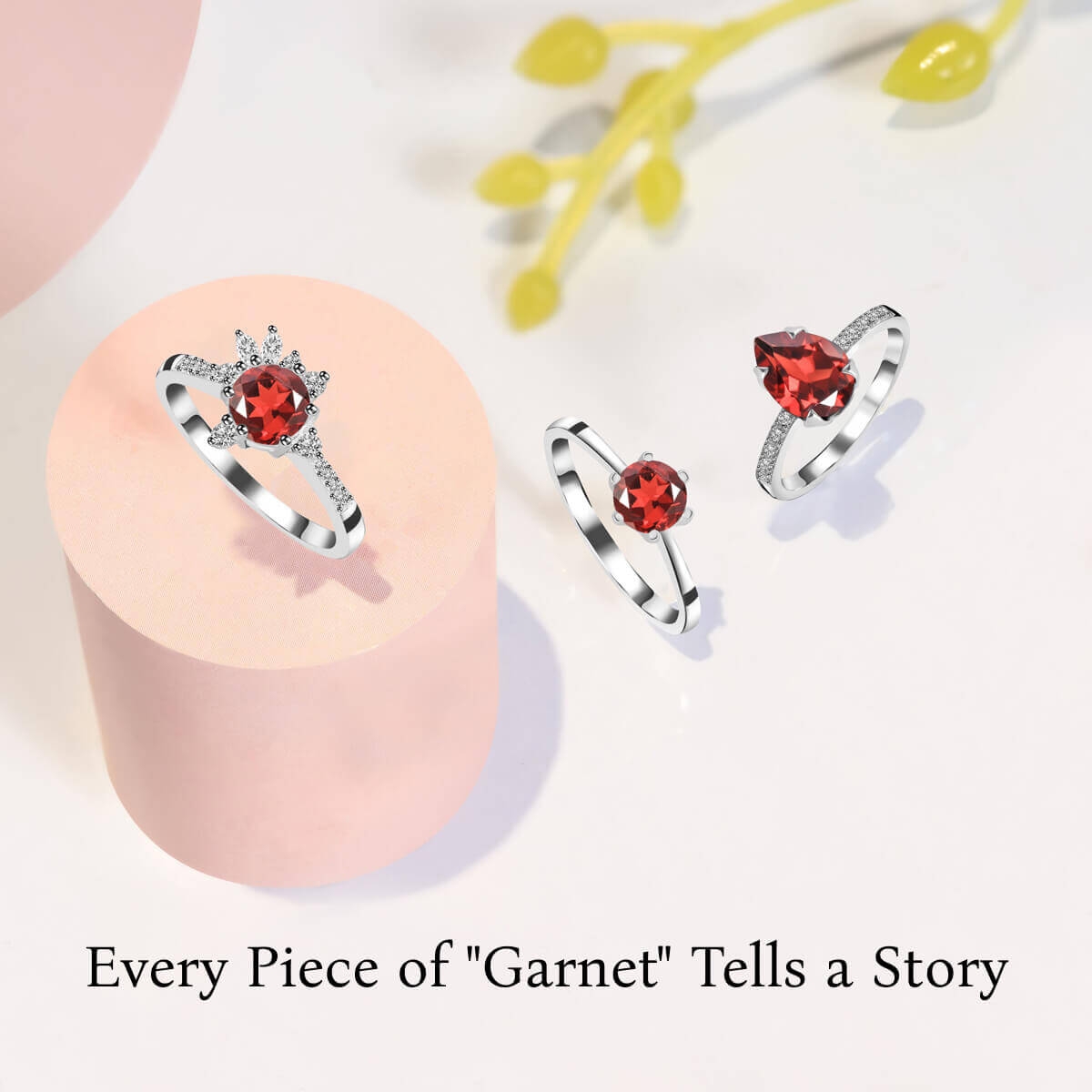 Garnet came from the Latin word 'granatus,' meaning seed. In French, grenat was used as a noun to refer to a dark red gemstone. Then spoken in English, grenat became Garnet. The vaults of ancient Egyptian pharaohs founded to include Garnet Necklace, talismans, and engraved rings or stones believed that they have magic powers and bring good luck.

Greeks and Romans of the old - age used the Garnet signet rings to wax seal crucial documents. Before becoming a desirable gemstone, it also gained immense fame in the Victorian era.

In the third and fourth century Rome, Garnet got used as a gem of protection by the soldiers going to battle. As per belief, it offered safe passage on long voyages. Royalty also preferred Garnet adornments for its talismanic or shielding qualities. Egyptians also had a conviction that the January birthstone eradicates bad dreams and helps to overcome an individual from the depressive state. 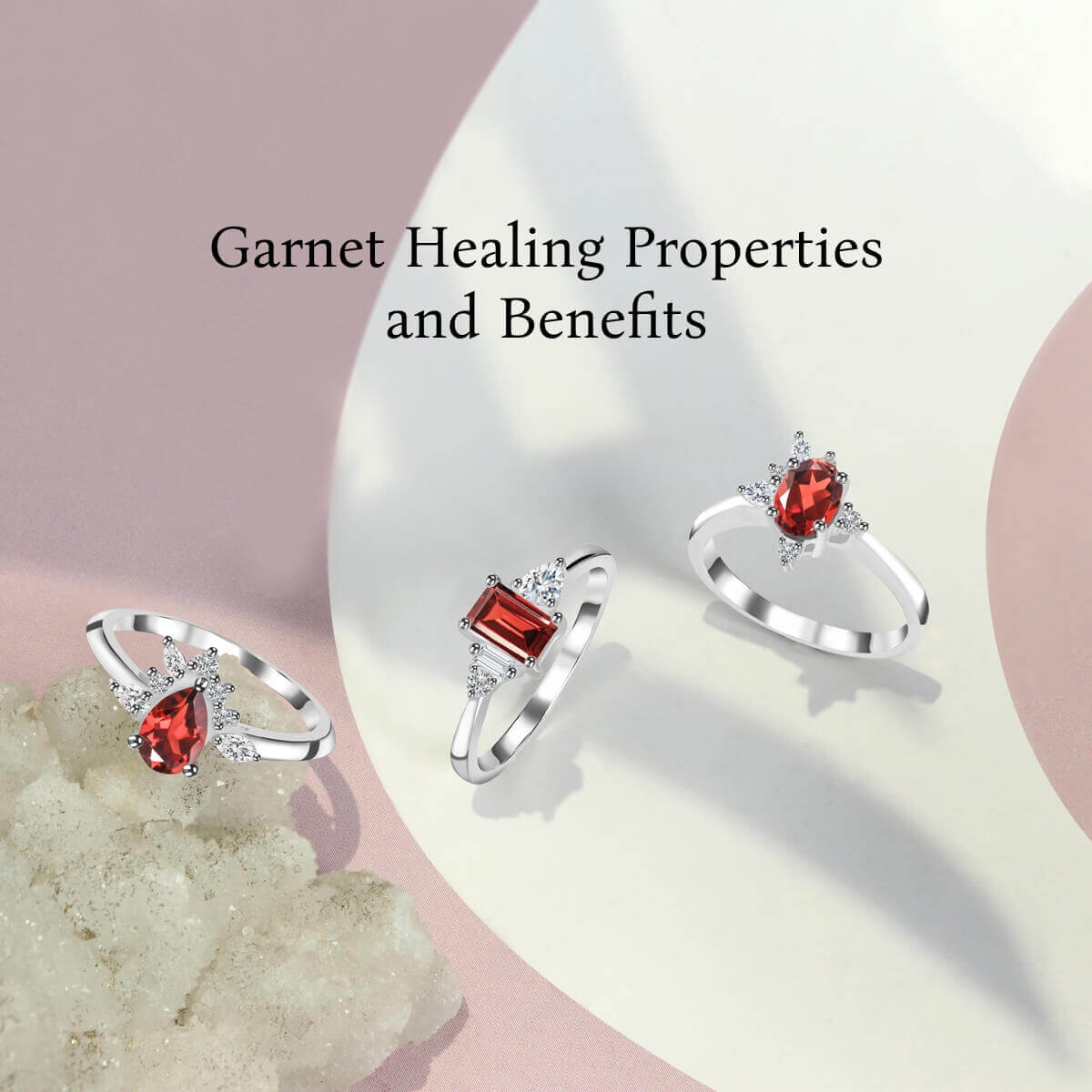 Garnet is a neo-silicate mineral whose hardness differs from 6.5 to 7.5 Mohs scale. Almandine is the most robust variety, also termed as abrasive. The rarest and most valuable type of Garnet is the Demantoid, which is of emerald green shade and belongs to the Andradite group.

The distinct chemical composition of Garnet renders various physical properties in them, including color and hardness. For example, garnets of green color have low specific gravity and hardness and are composed of calcium.

In contrast, iron garnets have greater hardness and typical red color particular to the gem. The blue variety of Garnet is the rarest kind of this stone, and it changes shades due to the quantity of Vanadium present in it.

Maximum January birthstones get mined in Madagascar, Tanzania, Turkey, Russia, and the United States. Whereas transparent varieties of Garnets get used for gemological purposes, their opaque versions get utilized for industrial uses.

Worth of Garnet Gem 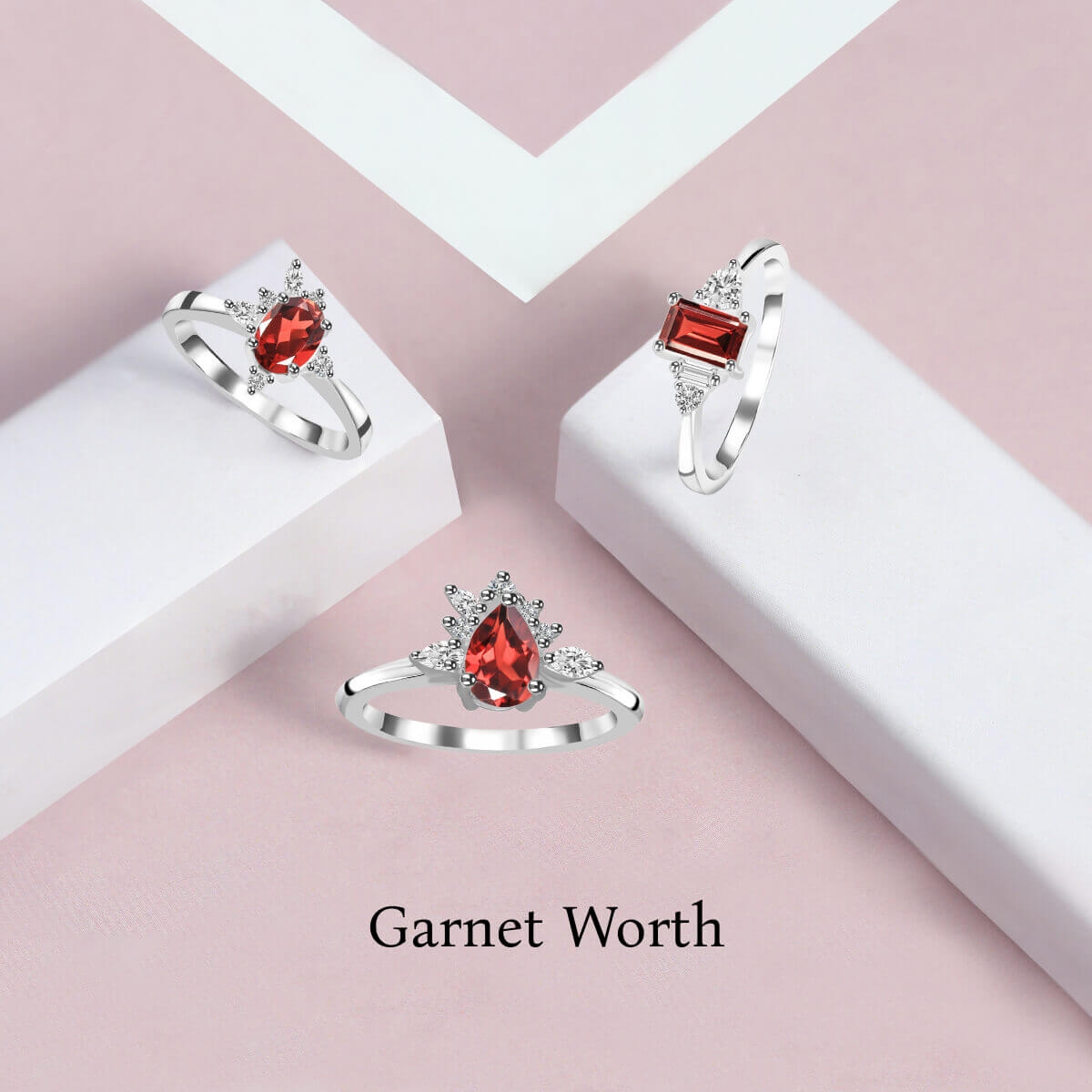 The worth of the Garnet gem depends upon the price per carat in India and worldwide. In addition, it relies on weight, treatments, and quality. Quality parameters to determine the value of January birthstone include cut, clarity, color, and carat. Green shade Tsavorite and Dermatoid Garnets are the rare and most costly ones

Shade gets mainly linked with Garnet, so red is the most sought-after color.The most costly Rhodolite Garnet starts from 40$ per carat, whereas the classic Malaia can reach 500$. Star Garnet can cost around 1500$ per carat or even more. 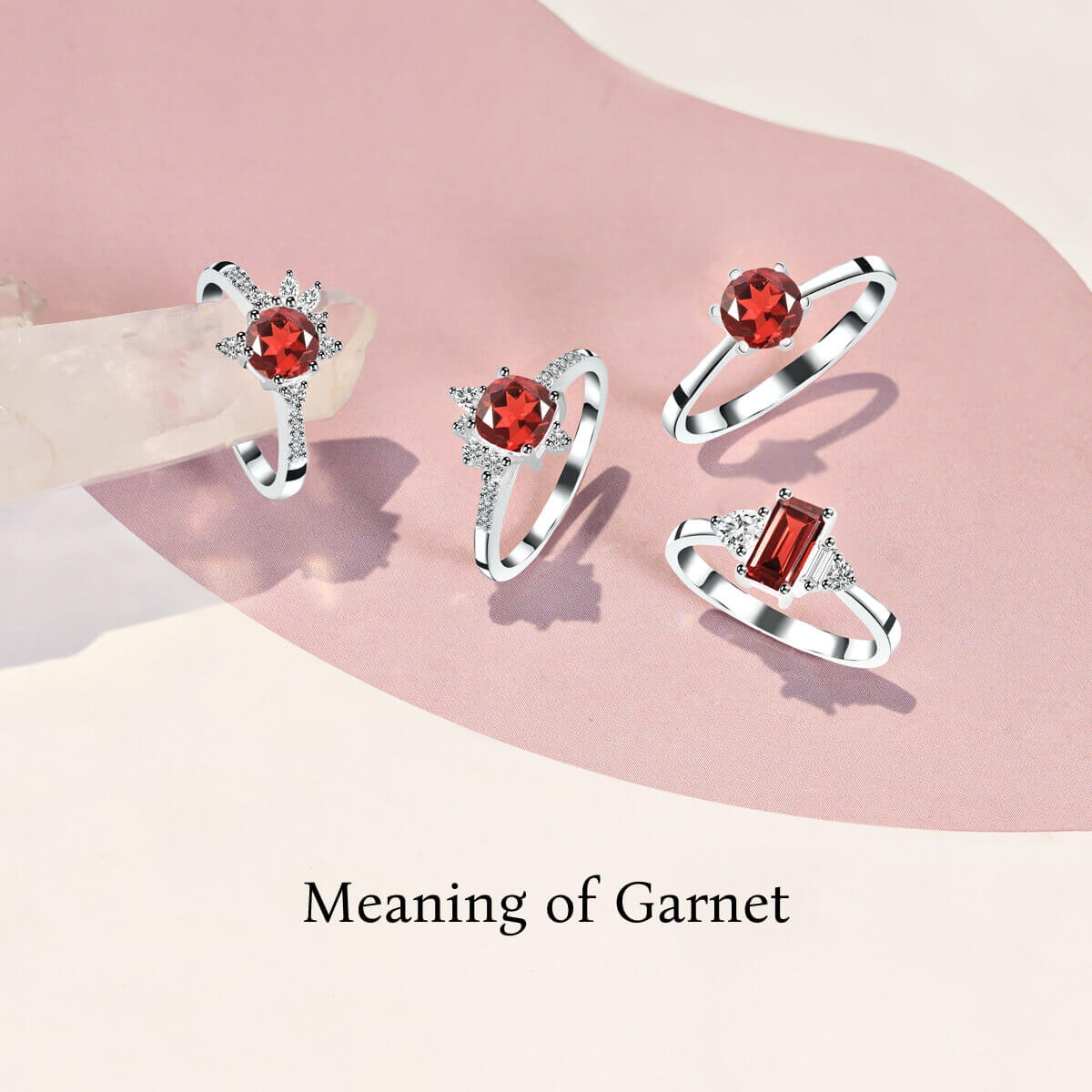 For a long time, the irresistible Garnet gemstone has evolved to have a connection with clergy and nobility. The polished red stone looks radiant in a pomegranate red color. A Garnet gem has spellbound people's hearts for centuries. The red stone is famous due to its stimulating and reviving features. This gemstone promotes the feeling of affection and commitment. Garnet is the best stone for couples as it nurtures relationships by improving physical and emotional problems.

The gorgeous red stone also depicts a positive mind that inculcates passion, light, warmth, and connection. Mesmerizing Garnet gemstone has a superb healing effect on an individual's mind, body, spirit, and emotional state. It has the impeccable quality of purifying and rejuvenating innate energy system, which helps to harmonize the inner healing chakras of the body. 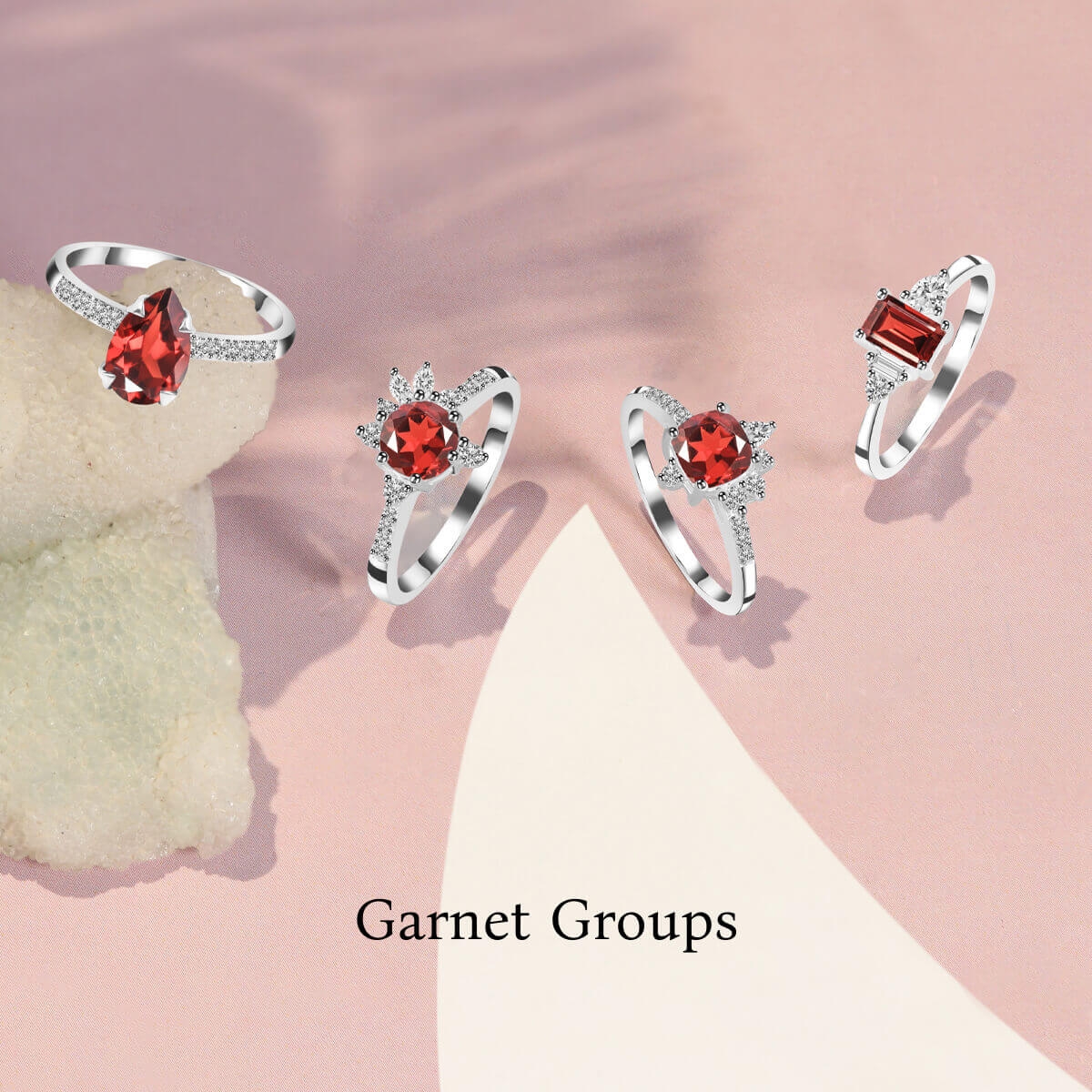 Red Garnet can get spotted in the most tempting shades of red, ranging from dark translucent red to very deep, almost blackish-red.

But they are infrequent as other colors are predominant in these varieties. Pyrope is the most famous variety due to its sought-after rich red pomegranate color. It's the sole member of the Garnet gemstone family, always showcasing red coloration in natural samples.

The chemical composition consists of magnesium aluminum silicate. Therefore, all the Garnets are combinations of various Garnet species as the chemistry of different species of red stone mix and merge while they form geologically.  Therefore, people are unaware of the existence of an original Pyrope and Almandines. The Almandines usually consist of necessary amounts of Pyrope and vice-versa. 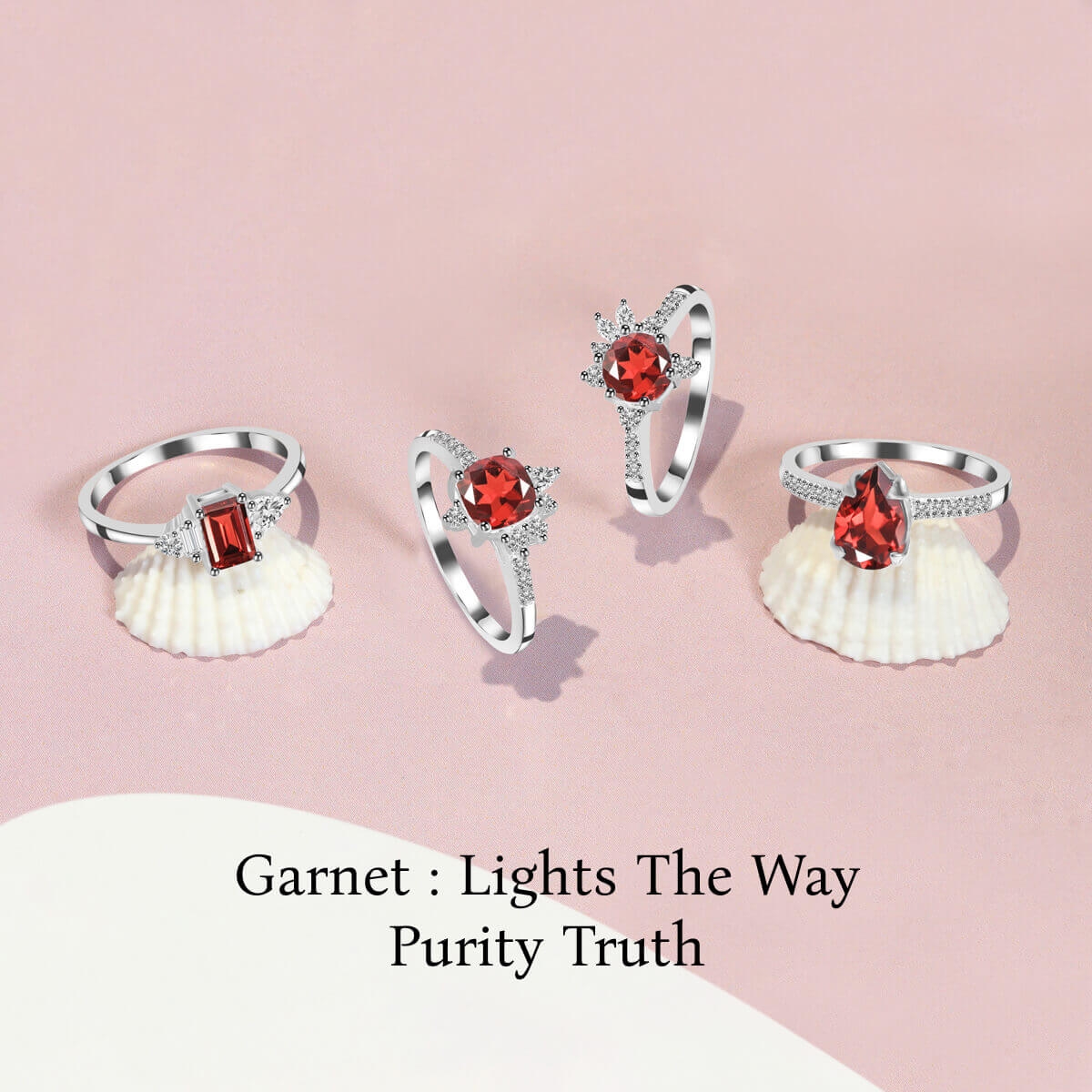 The gorgeous red Garnet stone is an old and modern January birthstone. As per astrology, it's January birthstone, and couples can surprise their partners on their second anniversary by gifting stunning Garnet Birthstone Jewelry.

January birthstone is the gem of protection and expression. It shields its wearer from negativity and evil thoughts. Garnet generates passion, fire, energy, and stability, and as per belief, it brings good fate in love and relationships.

The red gem Garnet birthstone is the ideal gemstone for the Aquarius zodiac sign. Consult an astrologer before investing in this gemstone to avail more benefits. Folks mostly prefer wearing radiant and elegant Garnet Ring in sterling silver for helping to attain favorable astrological results. 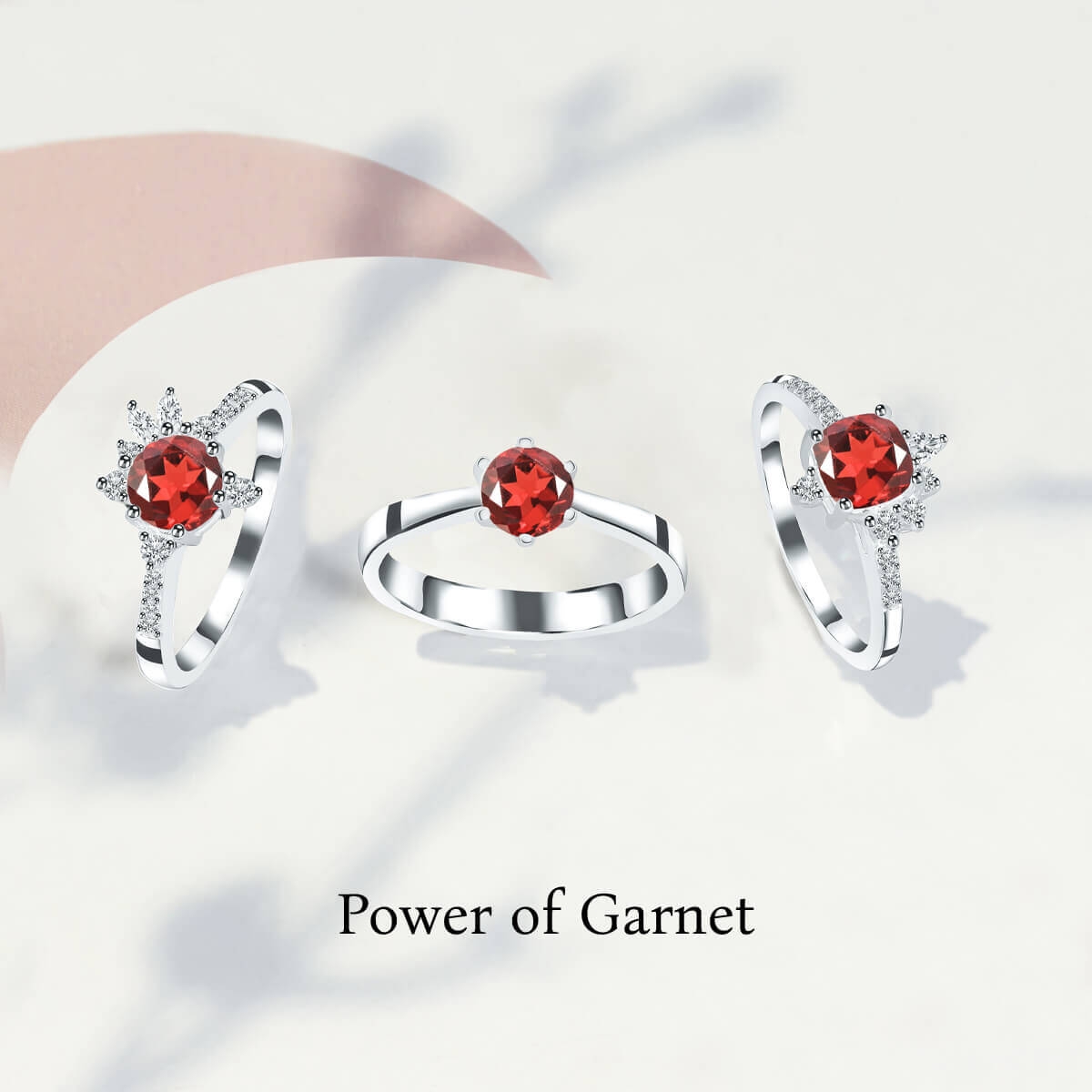 It also triggers and strengthens the survival instinct, welcoming fearlessness and hope. Garnet sharpens perceptions of oneself and others. It eliminates spine and spinal fluid disorders, bone, cellular structure, and composition. In addition, red gemstone cleanses the heart, lungs, and blood and restores DNA. Garnet improves the immune system and levels of energy.

It also works effectively on the base and heart Chakra. Red gem is also famous as the stone of commitment as it expresses love.

Ways To Check the Purity of Garnet Gem 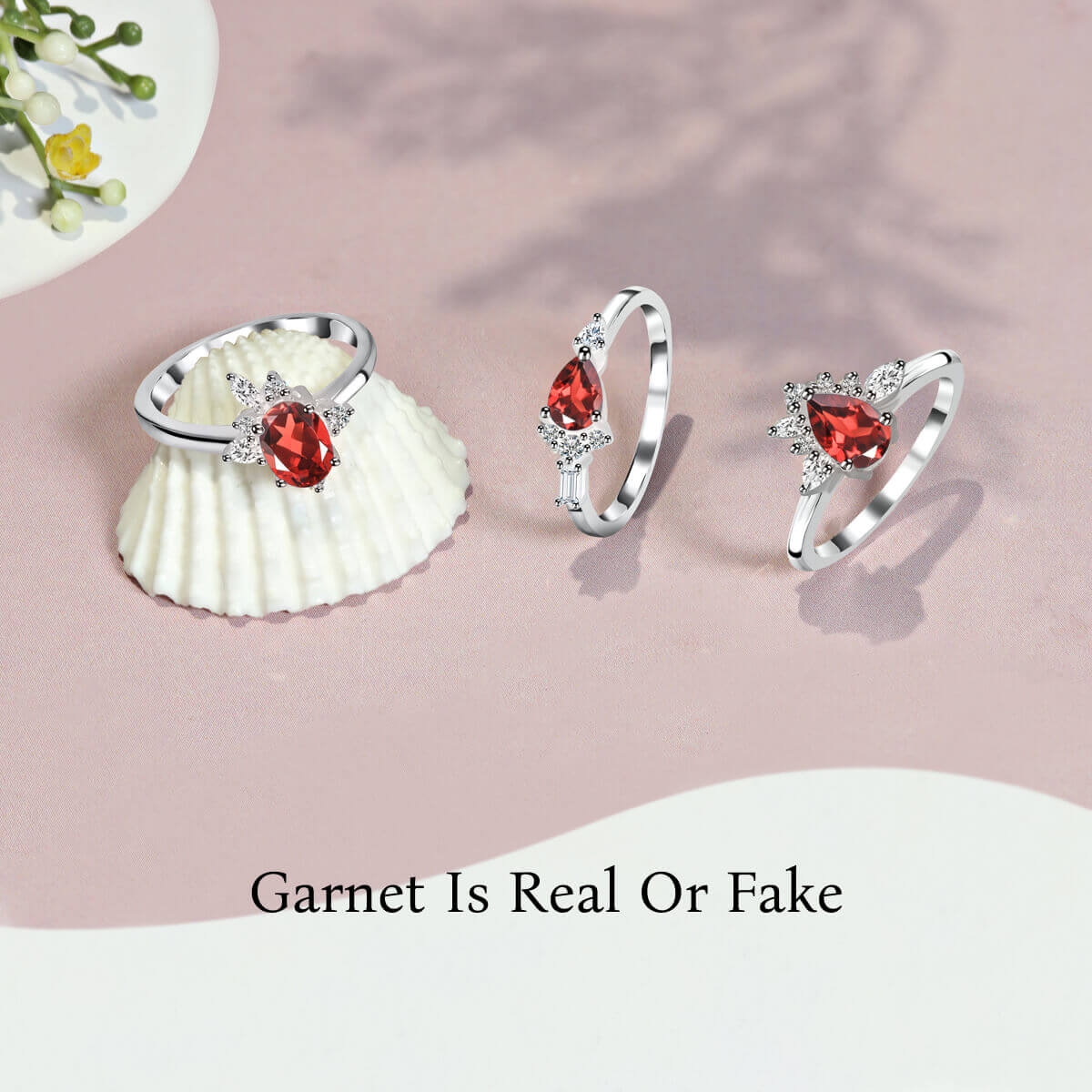 There are several ways to check the authenticity of the red January birthstone. First, always check the shade of the stone. If the shade is too light in color, then it could be fake. Search for impurities just in case the red variety has too many inclusions or the orange has significantly fewer; it could be fake if you cannot see the reflection in the Garnet gem; it's an imitation.

As their natural and chemical properties get examined, synthetic garnets get treated in laboratories. Generally, such gemstones are simple to detect because they are rarely too precise, with only a few noteworthy inclusions and glossy colors.

To understand this, you can keep the lab product as an example. When you glimpse it, you will realize it's a human-made gemstone. It has no flaws but can miss the natural or original features. 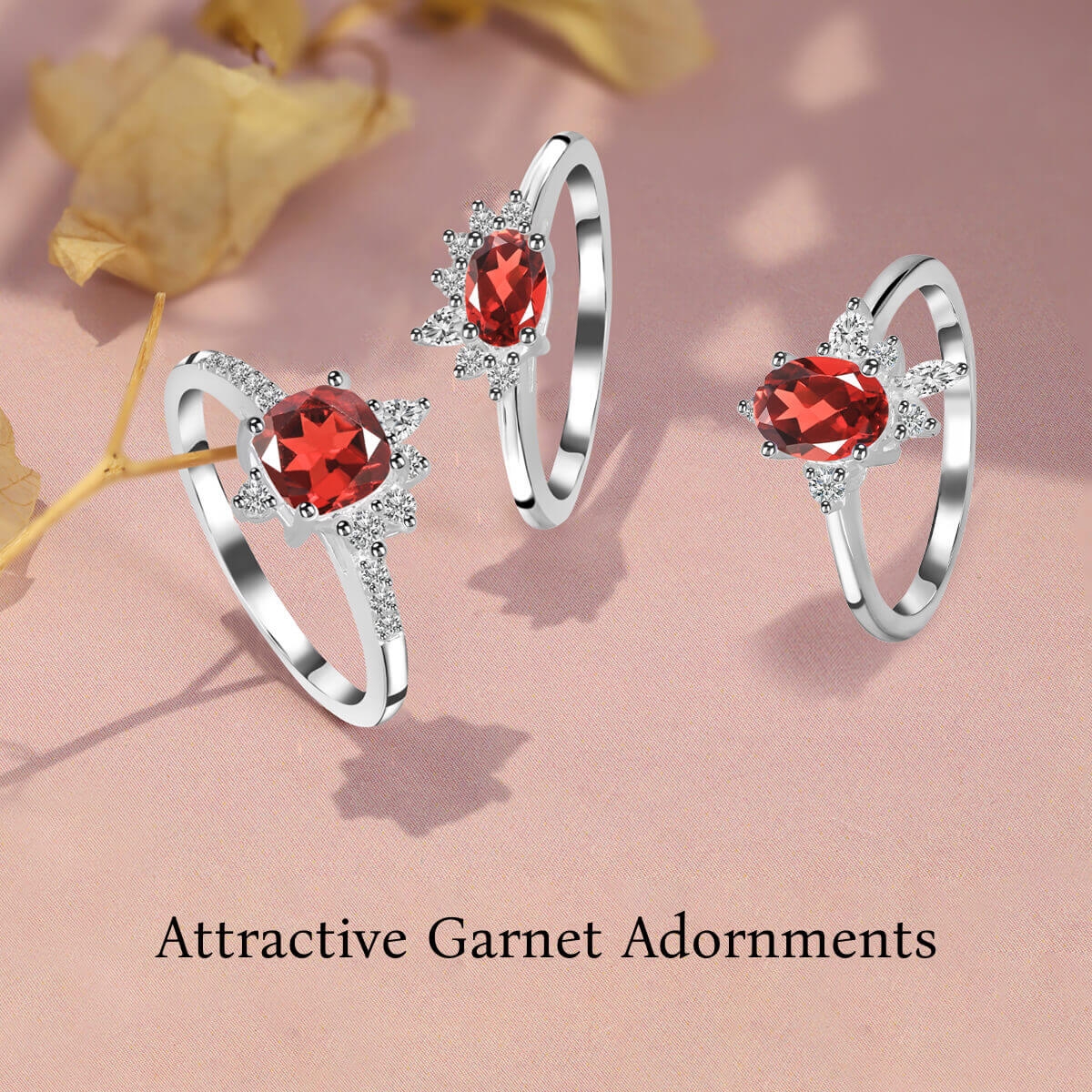 Whenever you think about fine jewelry trends, the demand for non-traditional gemstones has risen exponentially in terms of fame. Maximum jewelry lovers look for exclusive gem ornament styles that provide healing benefits and positive energy. You can choose to wear the accessory of red gemstone in the form of Garnet Earrings, either as a stud or statement jewelry.

One can wear dark red Garnets with varied colors in the wardrobe. For example, a black and white dress with a red gem looks polished and breathtaking. In addition, colors such as olive green, deep teal, or forest green look good with Garnet accessories.

January birthstone comes in many striking rainbow colors, making it different from a standard engagement ring. For many years this gemstone has denoted victory, love, and strength.

Color is the primary aspect to consider, as each elicits a different feeling. For example, red garnets add a vintage effect, and in Victorian times they got featured as desirable jewelry in vogue magazine. 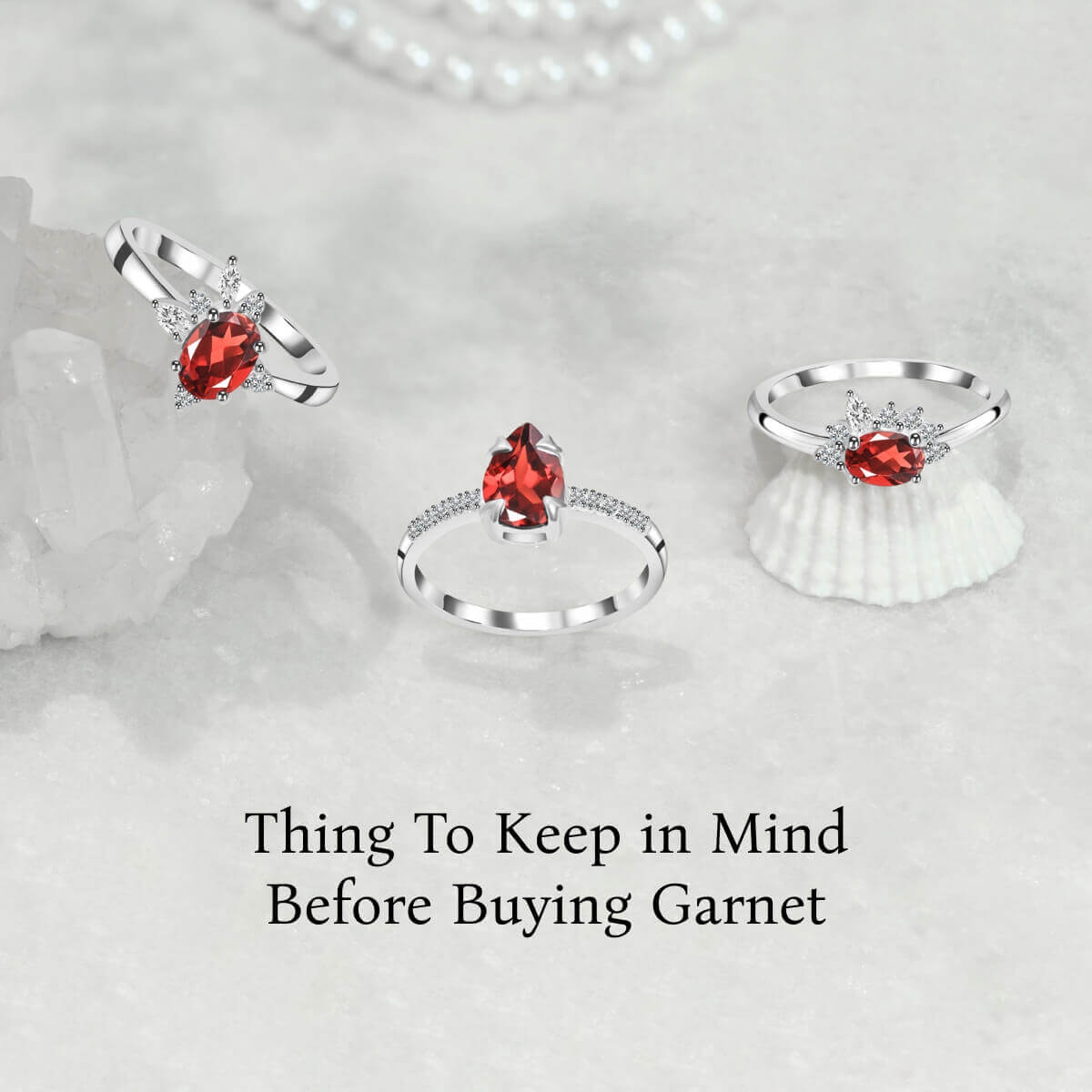 Whenever you purchase the Garnet gemstone accessories, make sure to keep some things in mind, such as :

Ideal Methods To Clean and Care For Garnet Accessories 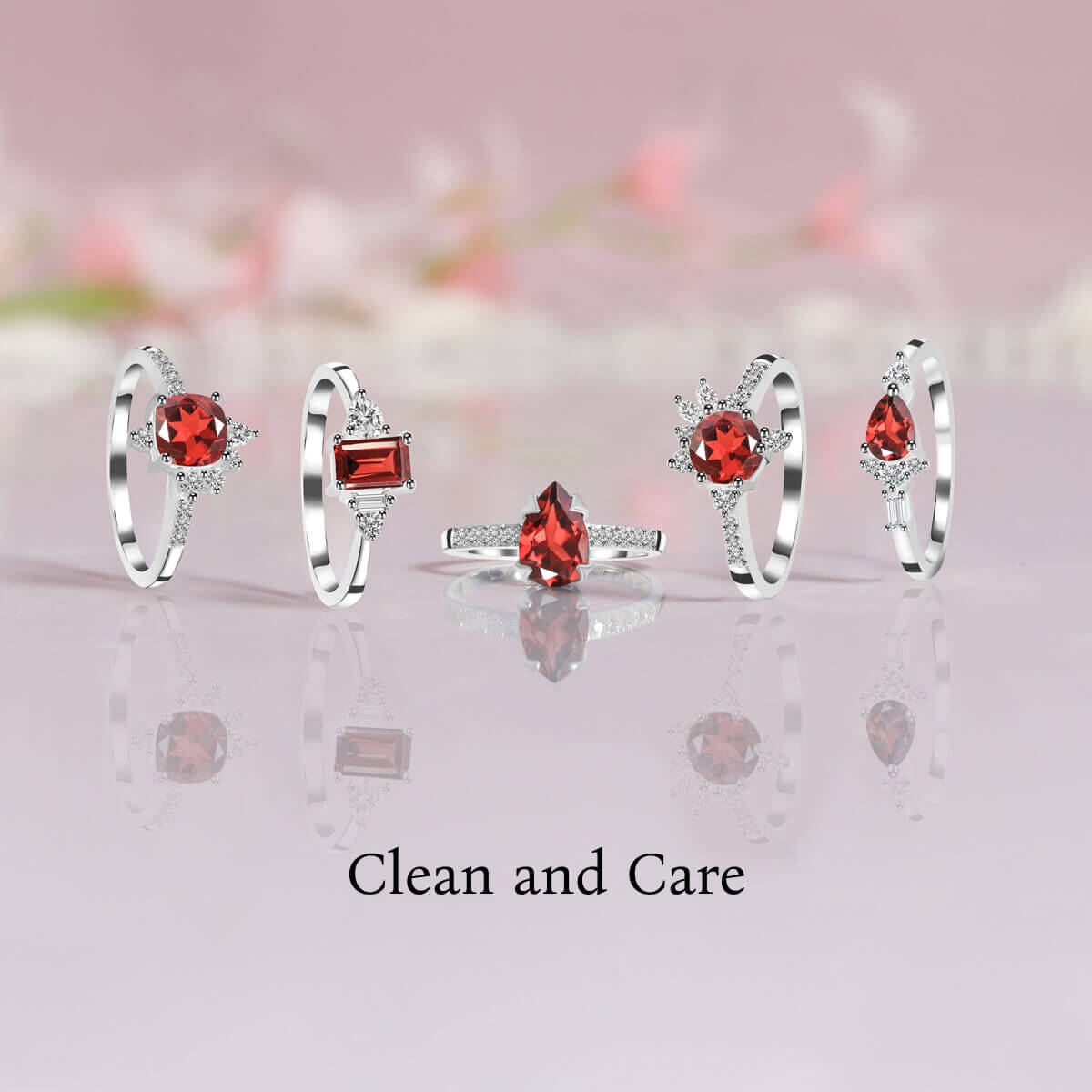 Garnet is a beautiful gemstone that needs proper care and cleaning. This gemstone is available in varied colors and sizes. Folks wear it as a day-to-day jewelry piece because of its toughness and long-lasting quality.

To get the right shine, you should use a proper cleaning method. Also, ensure to prevent stone damage; expert cleaning once a year is mandatory.

Polish the Garnet gem before cleaning. Polish it by utilizing a dry, and the smooth cloth will not leave scratches on the gem. In addition, the fabric should eradicate dirt, grime, and dust with constant rubbing.

Suppose the Garnet stone is in an ornamental setting. Use a toothbrush with a smooth bristle to gently clean the setting from the inside out. If it's on a decorative background, make sure not to touch the stone directly.

In this blog, we can get detailed and descriptive information about the elegant red and sparkling Red Garnet gemstone, also famous as the January birthstone.

It also enriches your knowledge and awareness regarding its symbolic meaning, worth, physical properties, types, healing benefits, and crucial parameters to detect quality and methods to take care of your precious Garnet ornaments.

Sagacia Jewelry is a newly launched online Gemstone Jewelry brand based out of Jaipur, India. We believe in offering premium quality products and professional services to all our valuable clients. Keeping it in mind, we design and sell pure 925 Sterling Silver Jewelry directly to all consumers.

We cater to meet the holistic demands of all our clients by creating exquisite silver gemstone jewelries that are surely going to captivate your intellect. In addition, one can also order us to make customized gemstone jewelry at reasonable prices. Please go through our charming online collection of jewelry designs.