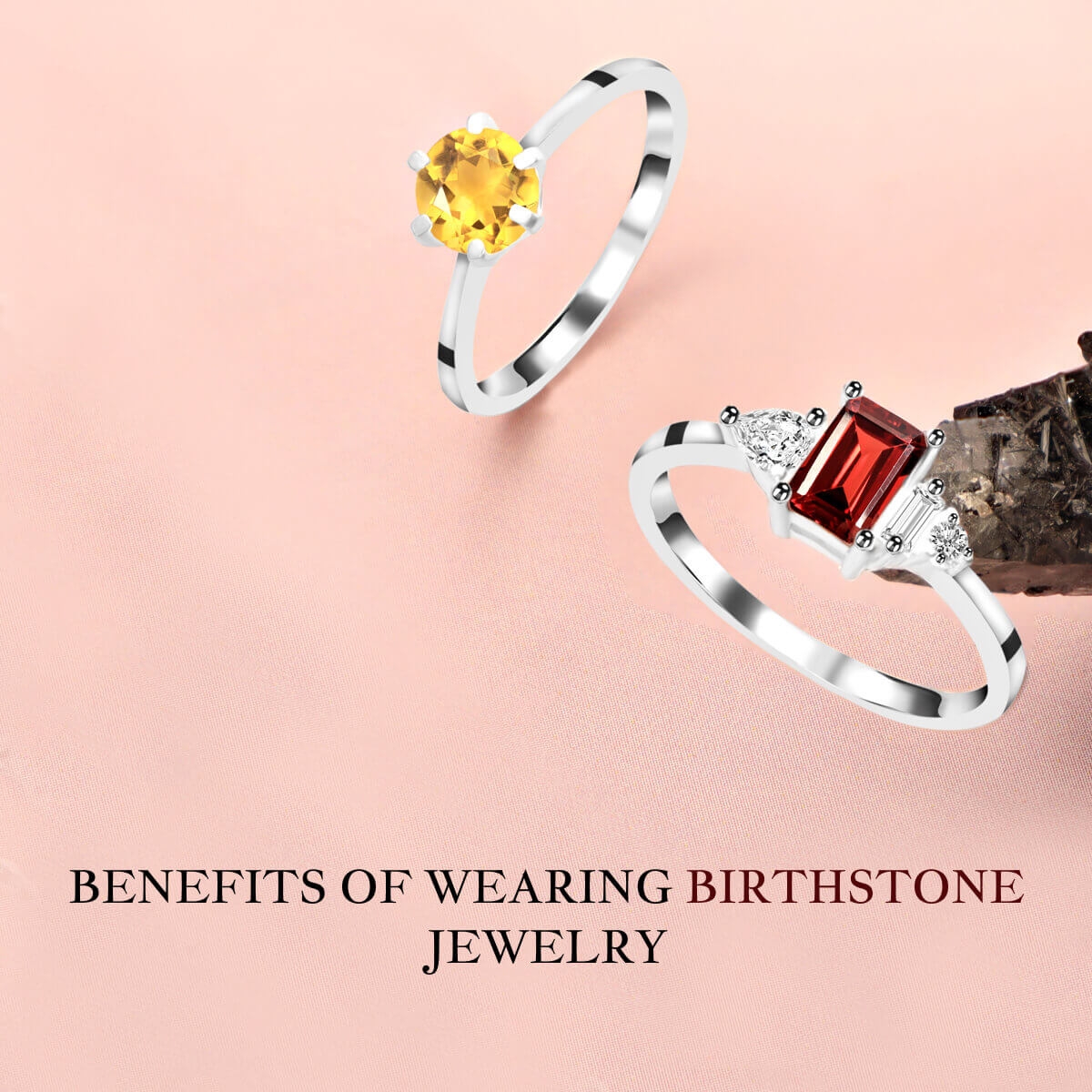 Life is a journey of joyful, sad, and tragic moments. Yet, challenges/complexities in life give you the strength to deal with them with complete confidence and dignity.

Maximum people are aware of the birthstone rings and their astrological benefits, but some are still not completely aware. Precious and dazzling gemstones or crystals, both of them have unique and excellent healing qualities.

For every individual, jewelry is a prized possession. They wear it in different styles to look trendy and elegant. From the ancient era till the modern century, gemstone and appealing crystal jewelry have captivated the mind of people with their timeless beauty and healing abilities.

Birthstones And Their Source 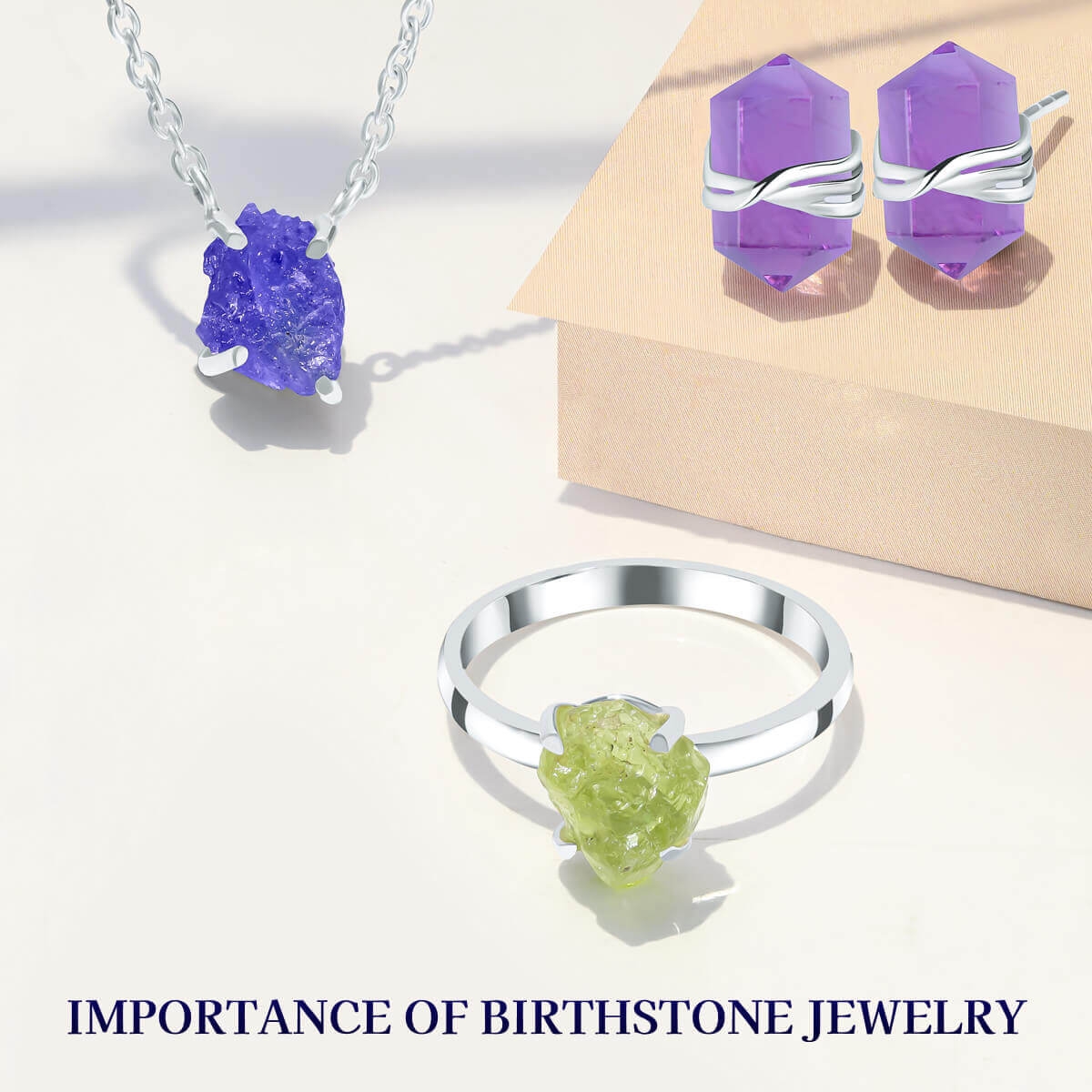 The Christian Intellectuals in the 5th century found a link between the twelve gems in the Breastplate of Aaron, twelve months of the year, and twelve signs of the zodiac.

According to them, every gem has a connection to a specific month or astrological alignment, and they would get therapeutic advantages for wearing one at that time. So, to get full benefits, people started wearing one gem every month of the year and gave distinct meaning and value to them.

Birthstones and zodiac signs offer meaningful personalization to ornament design. At present, the fame of birthstone jewelry is just not limited to any region, age, or gender.

According to the birth month of an individual, as per belief, modern birthstones possess healing powers. In addition, they welcome good fortune and good luck to the wearer. However, selecting one is entirely based on individual preference and choice. 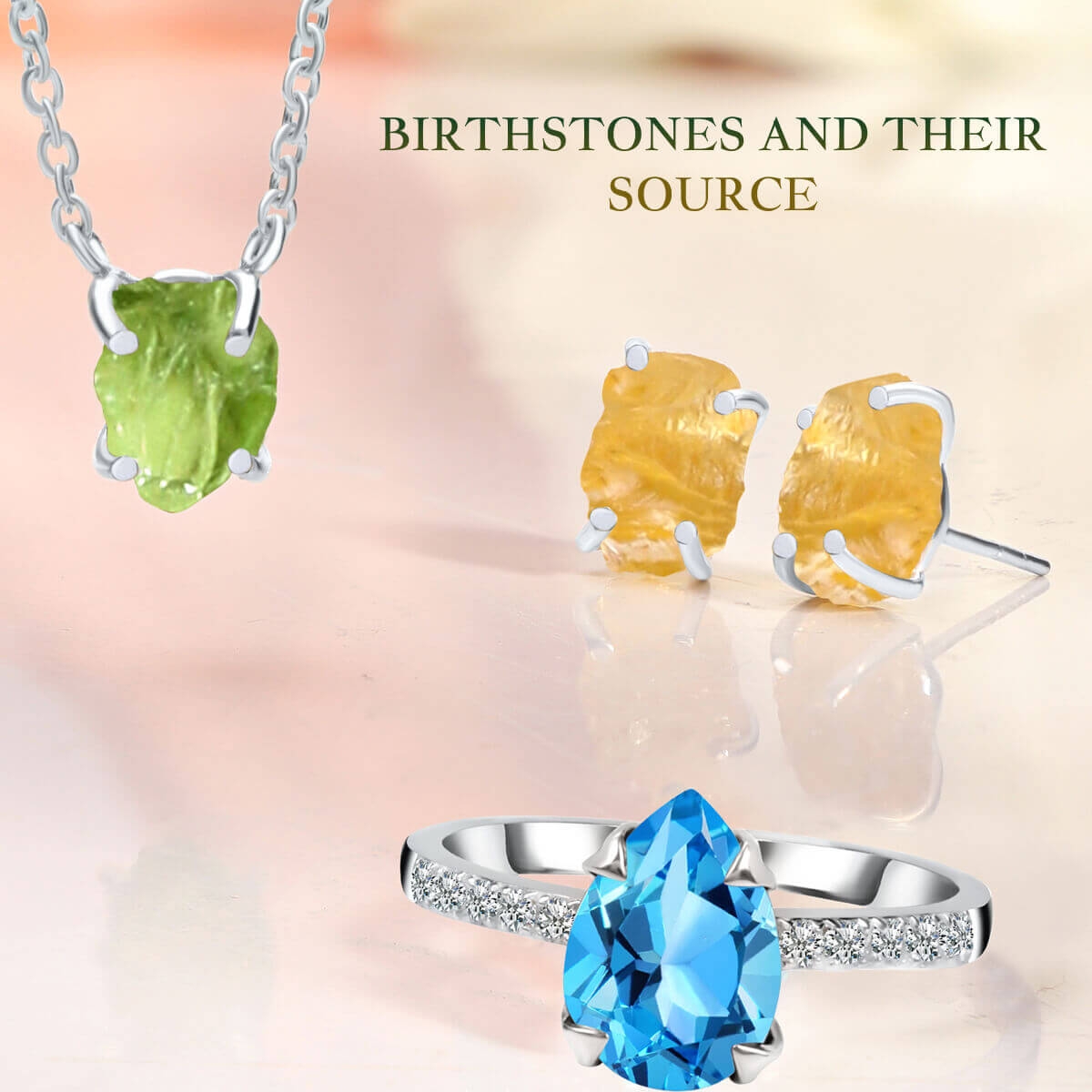 The name itself suggests the hidden meaning behind the word birthstone ornament. In the famous styles of jewelry, the birthstones never go out of trend.

Adding a touch of grace and classiness to the ensemble, it also grooms your inner personality. Since the old age era, birthstones have been used tremendously by people. They used to wear or use them in varied ways, such as a lucky talisman, protection tool, and for good fortune.

People wear astrological relevance of all birthstones as per the zodiac signs to deal with varied problems of life. Therefore, gifting sparkling and alluring birthstone jewelry is going to be a valuable and tempting gift for your close ones.

Planetary movement directly affects the zodiac signs. Therefore, as per the birth date and month, one should wear the birthstone. For every month, there is a specific gemstone, and select it according to your birth date.

Garnet Gemstone For the January Month 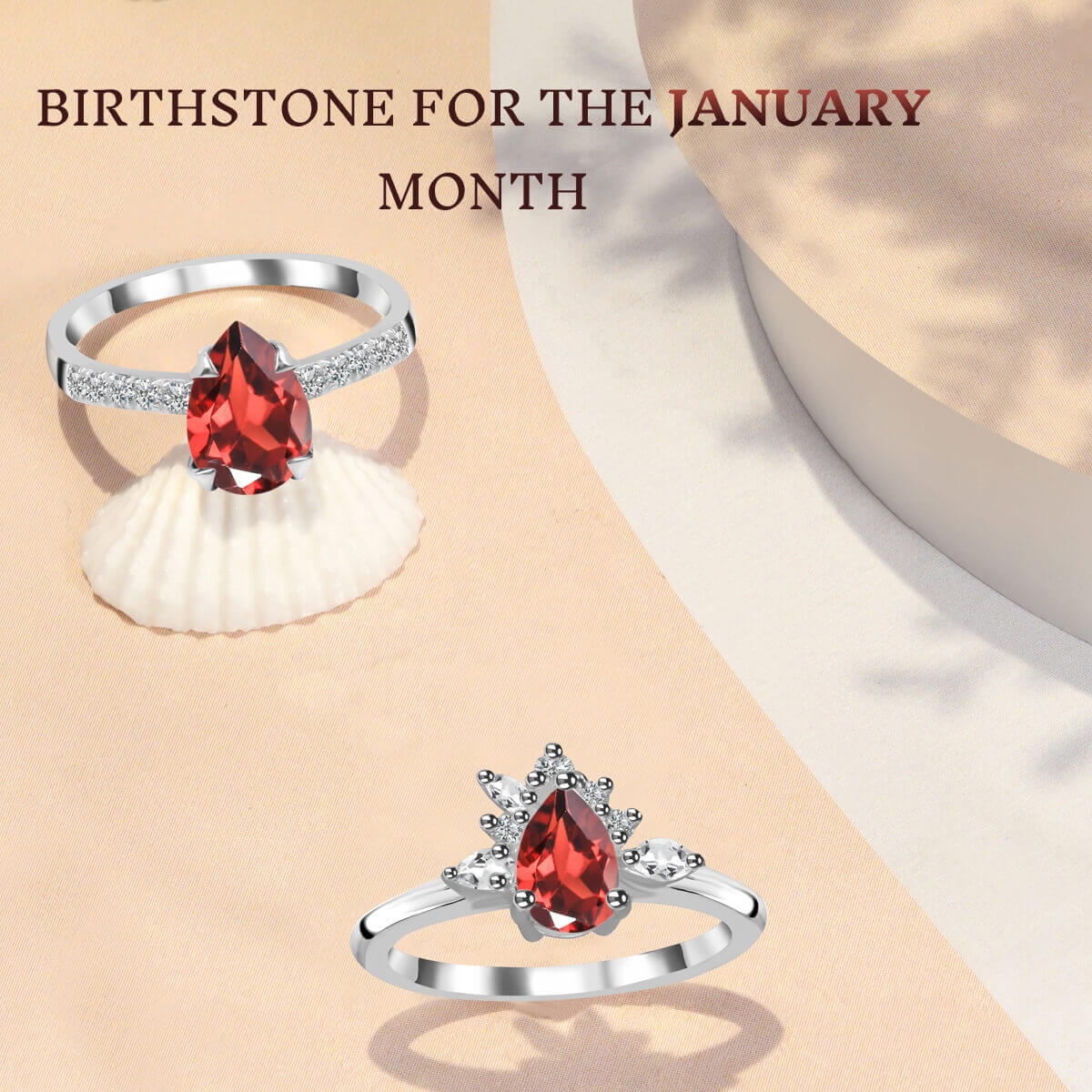 January month is a month to start a new year with a fresh mind and aspirations for new beginnings. People flaunt their zodiac sign and what it represents about them, and they wish to express that to the world by wearing birthstone ornaments. For example, people born in January must wear Garnet Ring.

Garnet is a red color gem that signifies love, immortality, and passion. It comprises a group of silicate minerals rather than one. The word 'Garnet comes from the Latin word 'granatus,' meaning seeds. Early Romans and Egyptians used the Garnet gemstone that was around 5000 years back.

It's an ideal gift for the ones who are born in the first month of the year and the best present for couples who are going to celebrate their second wedding anniversary. January-born people will be amazed to know that their birthstone has many incredible healing qualities, and they are as follows: 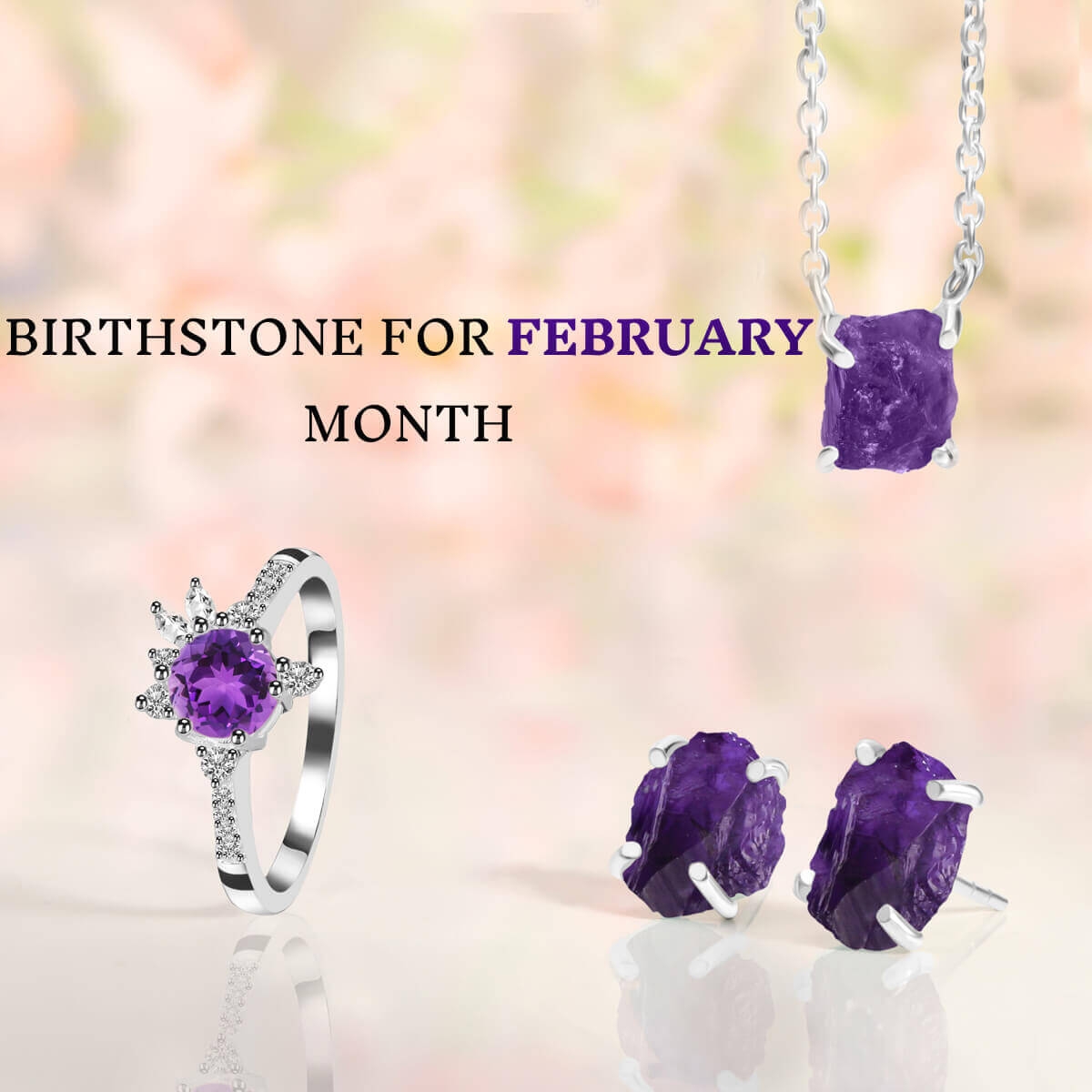 The Amethyst is the so-called appealing gem of February month and the lead of the show. The wonder of this dazzling and charming gem has no end. Analyse and explore the world of February Birthstone or purple beauty. It belongs to the Quartz mineral family and has proven effective in encouraging clarity of mind. The birthstone of February month gets adored by the elite class and royal families. 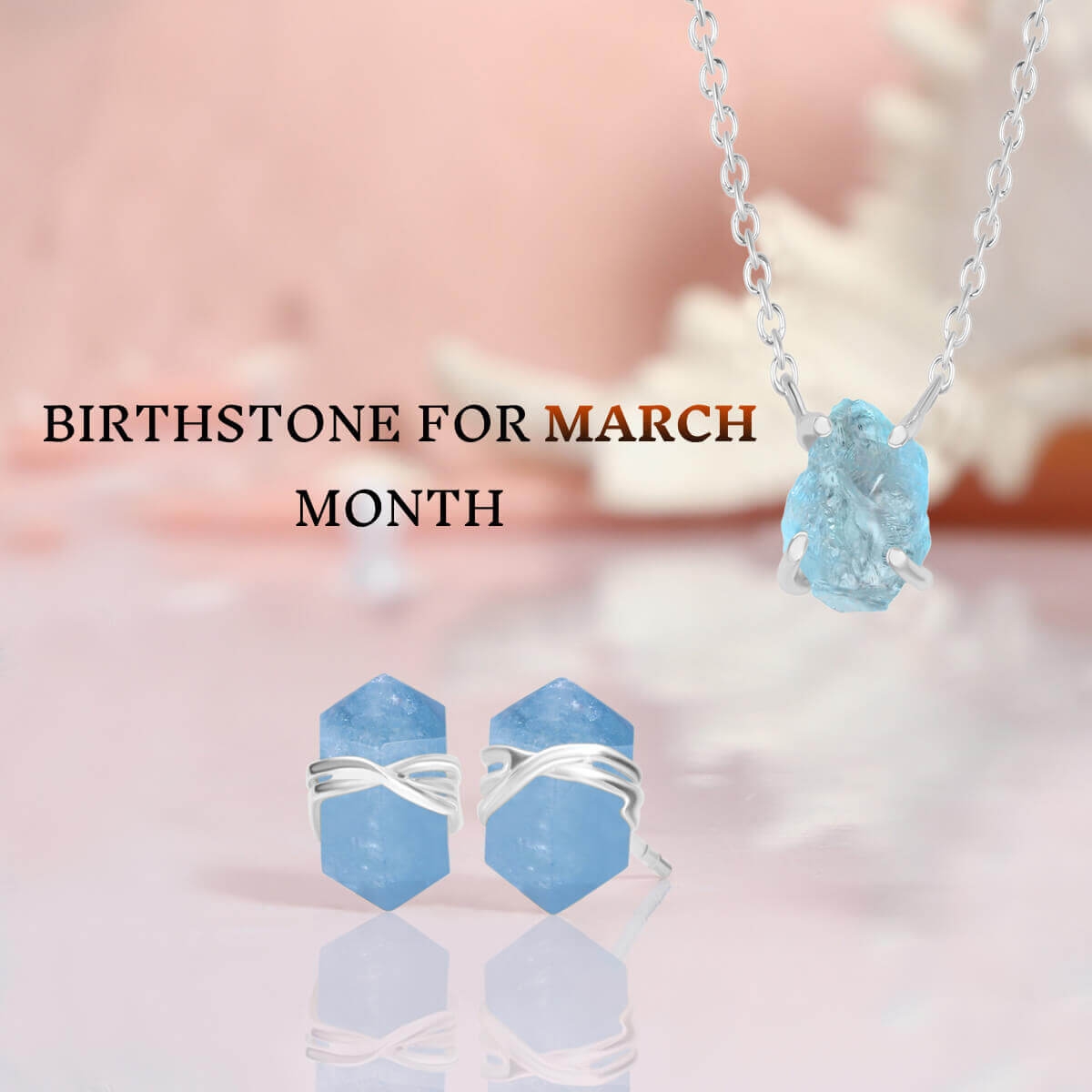 People born in March should wear a glossy and captivating Aquamarine gemstone. One can get this gem in varied shades of deep blue and blue-green. The Aquamarine gem belongs to the Beryl mineral family. Its found in many places, such as Brazil, Australia, China, and Pakistan.

Aquamarine is available in the paths of tinges of iron in the Beryl crystal. This premium quality gemstone is perfect for making an ideal piece of Aquamarine Jewelry. The word, Aquamarine got its name from a combination of two words, 'Aqua' meaning water and 'mare' indicating Sea. Therefore, the tempting and glowing gem looks like seawater. 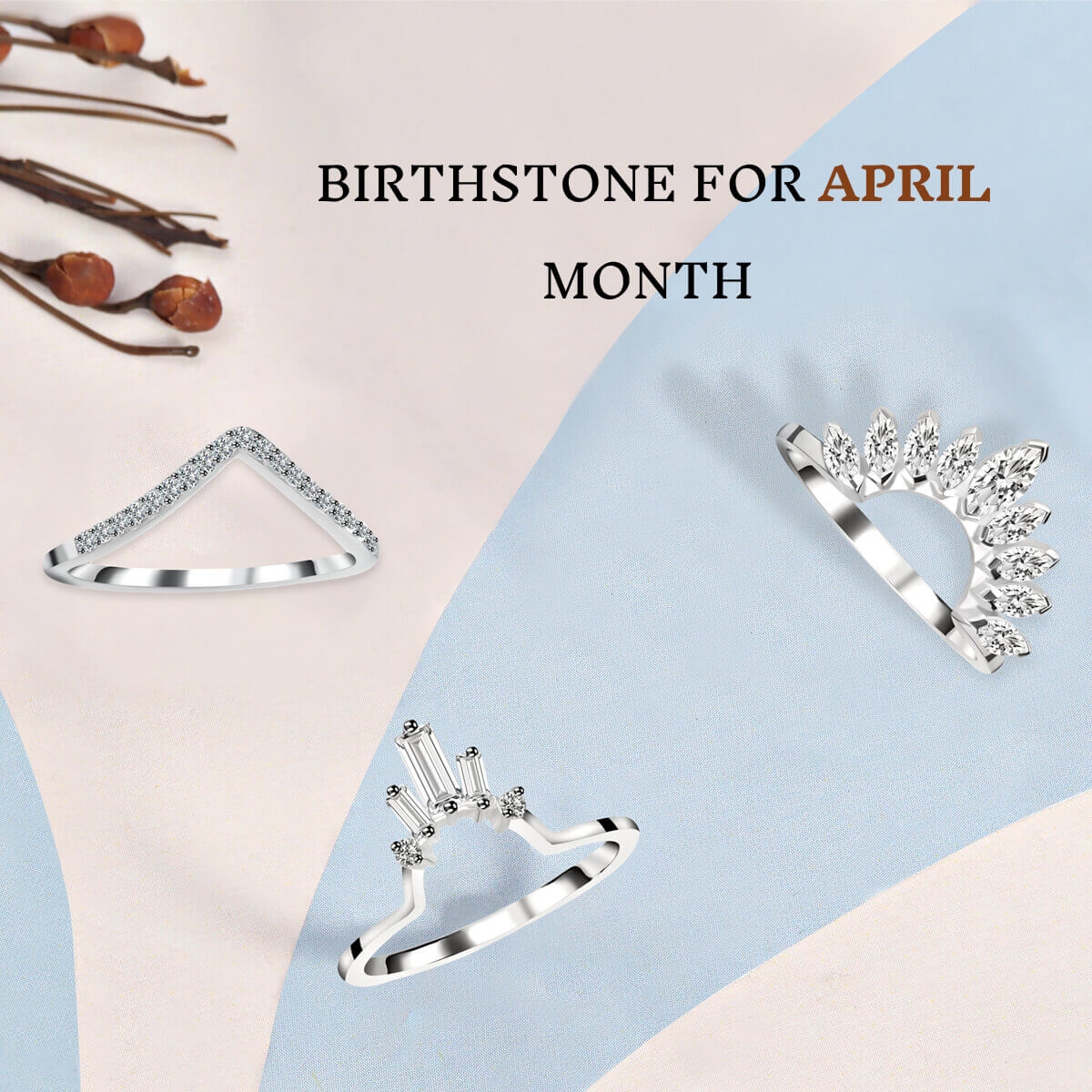 Ones born in April will be overjoyed to know that precious and timeless White Topaz is your birthstone. Furthermore, you will be enthralled to notice that it's the alternative to diamond. White Topaz looks transparent and owes remarkable recovery and spiritual advantages. Another name for this gemstone also gets addressed as Clear or Silver Topaz. It gets mainly sourced from the mines of Brazil.

From an astrological perspective, people with zodiac signs Aries and Taurus should wear charming and dazzling White Topaz Ring. This April birthstone enables its wearer to move on the right path and increase decision-making power.

The alluring Silver Topaz has been connected with the planet Venus. As a result, it's a universal gemstone for all zodiac signs. The superb metaphysical qualities of this gem assist the wearer in personal and professional life both.

Green Onyx Gemstone For May Month 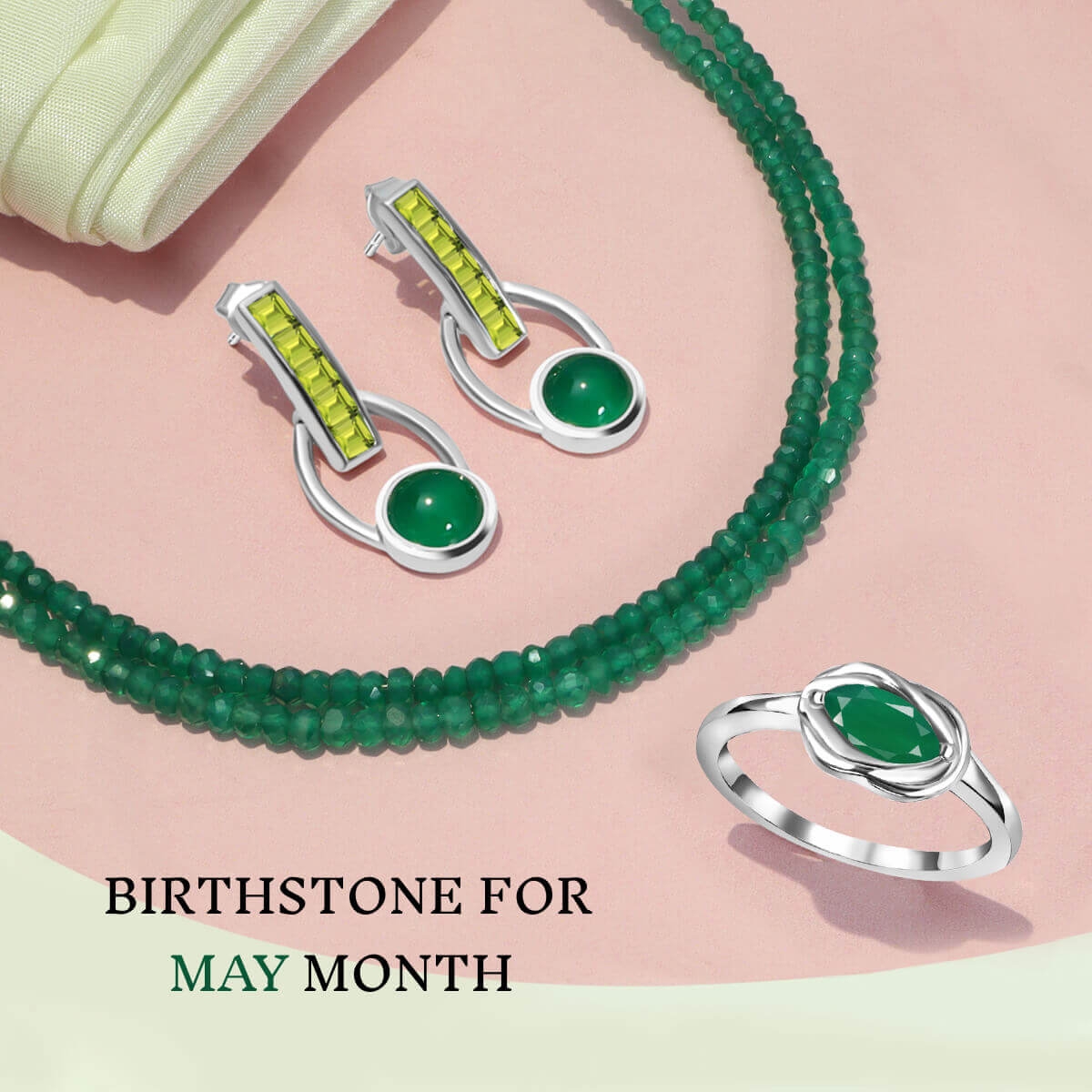 The magnetic May Birthstone Green Onyx is the astrological alternate of Emerald gemstone. This irresistible gem also has varied spiritual and healing attributes for its owner.

People with zodiac signs Virgo and Gemini should wear the beautiful green Onyx, the May birthstone. The jewelry of this green beauty looks attractive in silver in the form of rings, pendants, and bracelets. Green onyx is a semi-precious astrological gem connected with the Mercury planet.

The Green Onyx has many immeasurable advantages covering economic, academic, and medical success. In addition, it calms the Heart helping you to achieve a peaceful emotional state.

Onyx comes from the Latin term of the exact spelling of the Greek word ''onux'' which means ''fingernail'' or ''claw'' as the veins on this crystal appear similar to the color of your fingernails. Green defines earthy and green shade.

In the 21st century, sparkling green gems get used as a gem in designing elegant pieces of Green Onyx Jewelry. 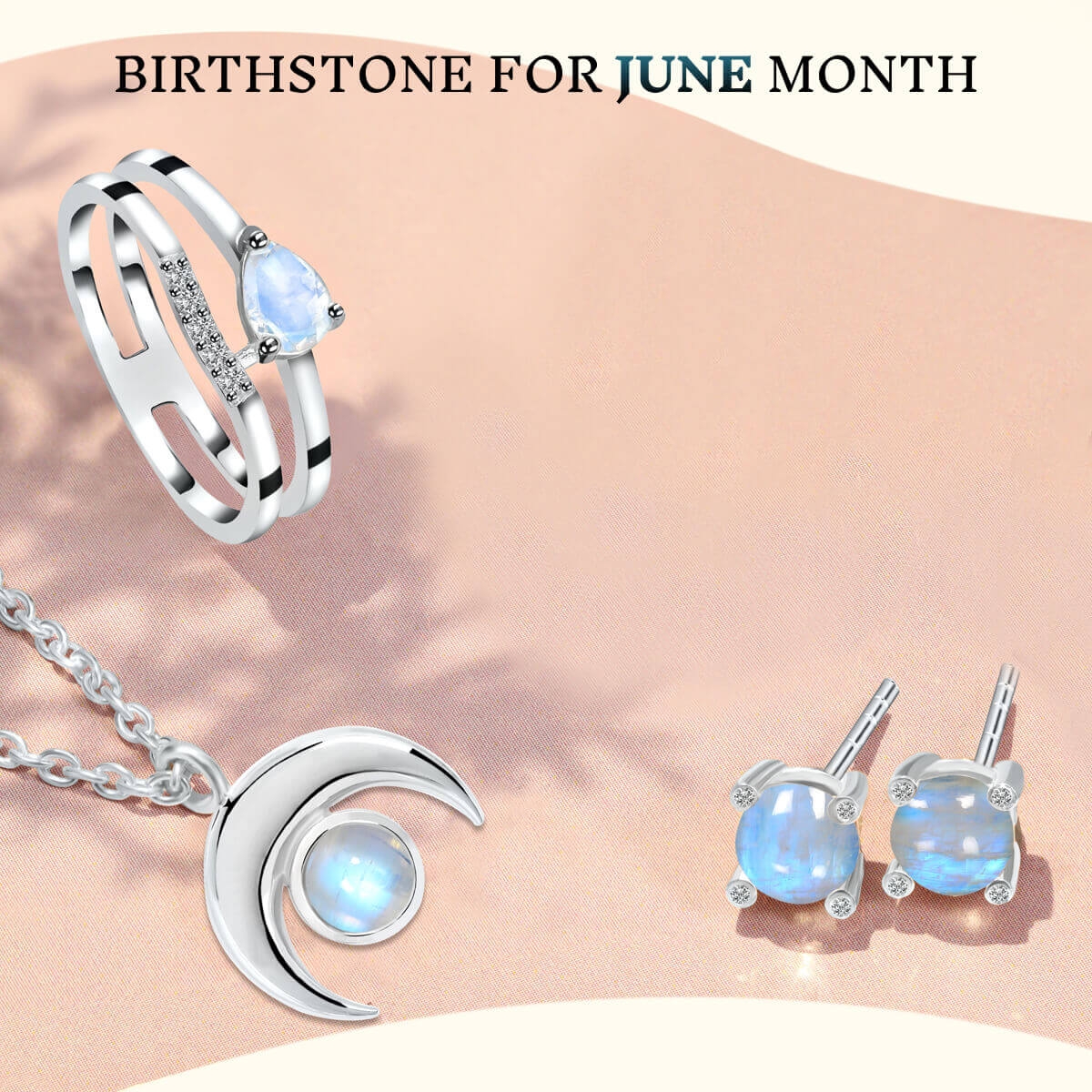 Moon and its magnificent beauty get admired by people everywhere. The June-born people will get delighted to know that their birthday month gets represented by the Moonstone gem.

The lustrous Moonstone Jewelry displays alluring blue and white refracted light that looks like an actual moon. It also represents sacred feminine energies. Apart from this, the gemstone is known as the bringer of good fortune and luck.

Moonstone belongs to the feldspar mineral group. Therefore, one can get the best quality sacred stone in Sri Lanka. The old Roman natural historian Pliny claimed that the Moonstone changed its look with the phases of the moon, and this faith was still present until the 16th century. 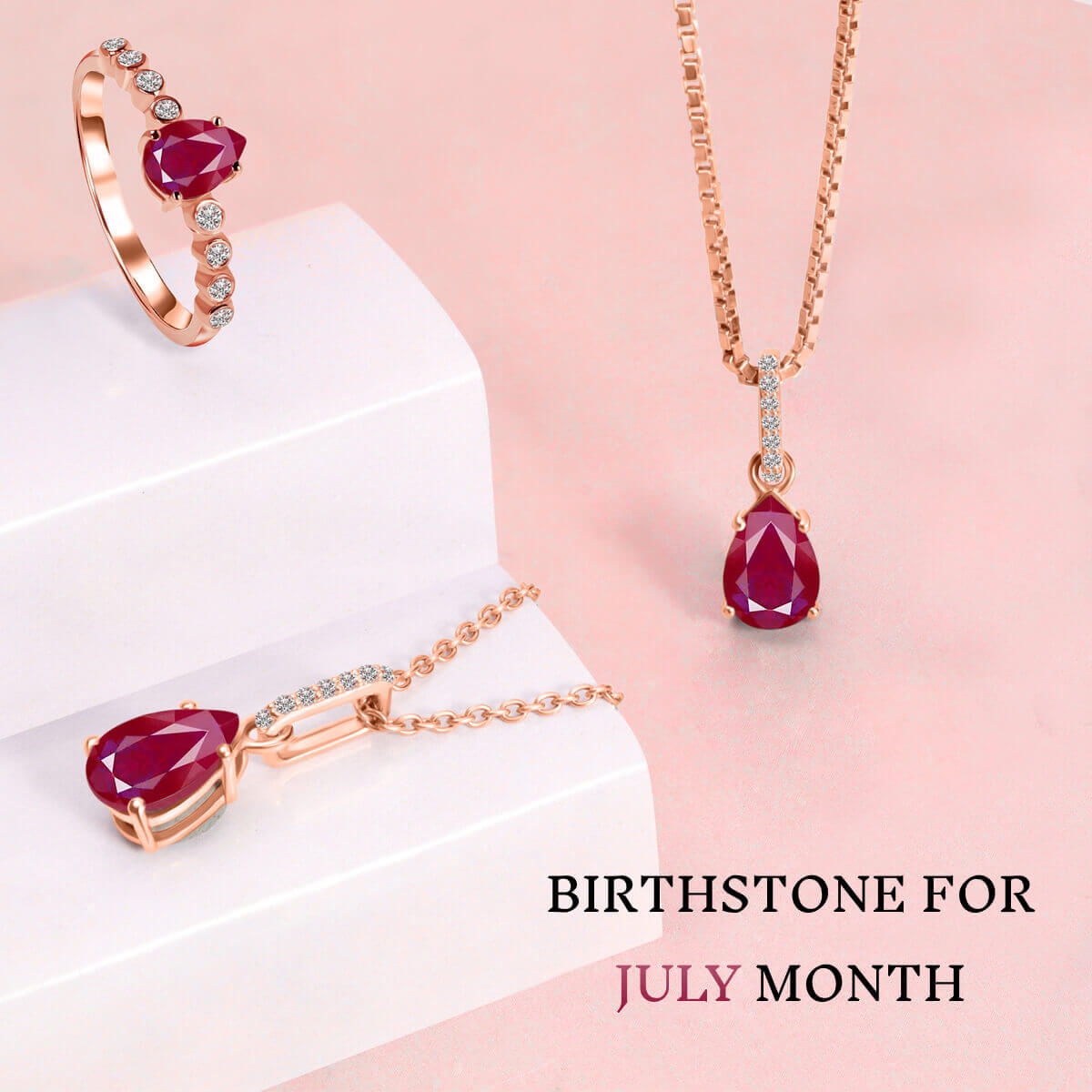 People born in July month will be on the seventh cloud after knowing that they can use one of the reputed gemstones of the world, Ruby. It's a classic gem for July month in maximum cultures globally.

The red July birthstone Ruby has been given the position in the order of gemstones by the Hindus. It got named the 'King of Gems,' an accolade for its blood-red vigour, known to safeguard the wearer from evil. Ruby and its dark red color also denote love and extreme desire. Features of Ruby gemstone are balance, contentment, virtue, strength, and safety from evil. 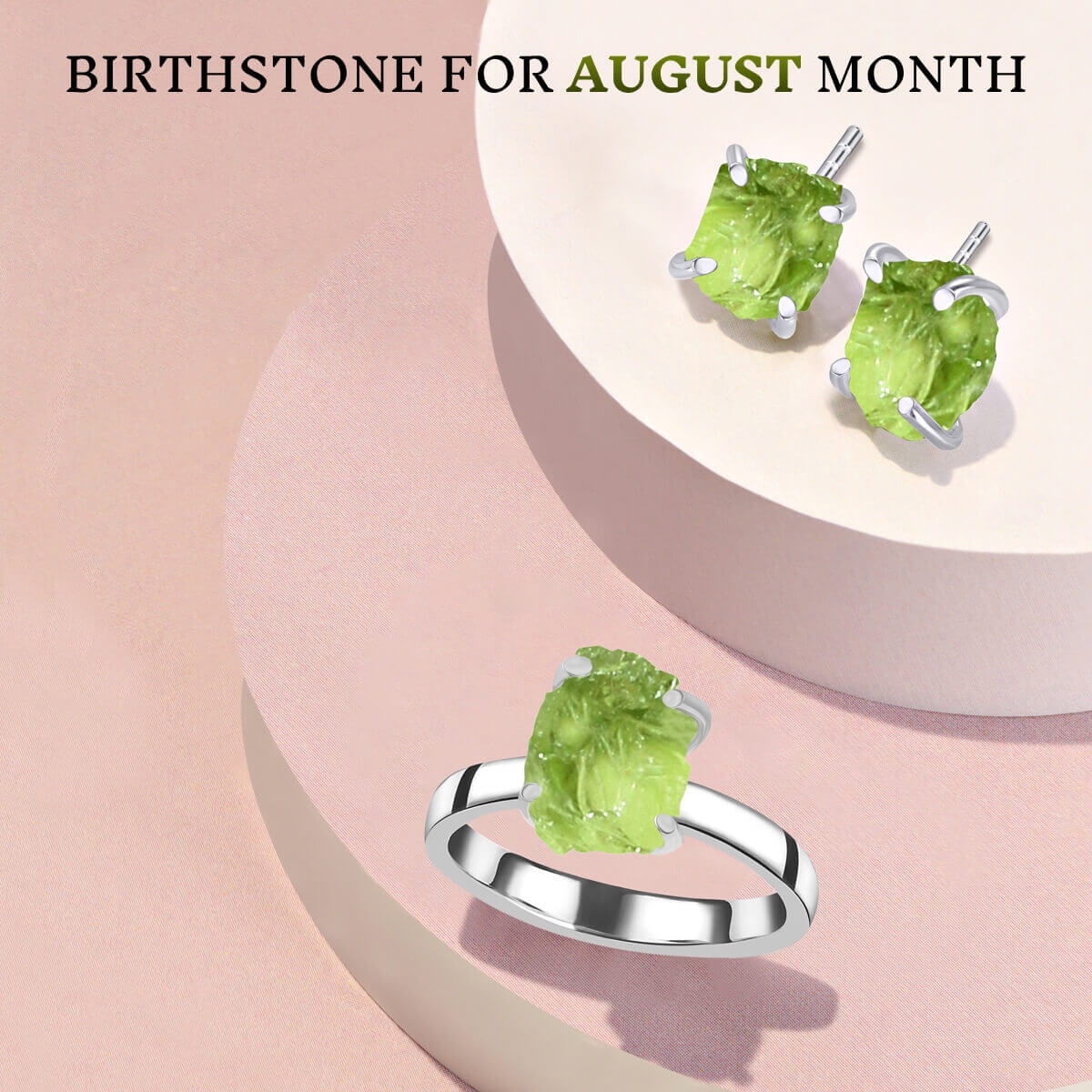 August born can feel revived by wearing the mesmerizing nature vibe Green color Peridot. This birthstone for August consists of historic powers of healing and eradicating nightmares. It looks damn fascinating as Peridot Jewelry and is worn mainly in the form of beads, necklaces, and more.

Embrace joy and serenity in life by using the August birthstone. It increases power and reduces anxiety. A green color gem also helps in realizing the value of relationships and their values.

The Peridot Birthstone is known for healing asthma and the sinus. It balances energy and evokes rebirth and revitalization. In addition, a wearer of the Peridot Ring feels protected from evil powers. 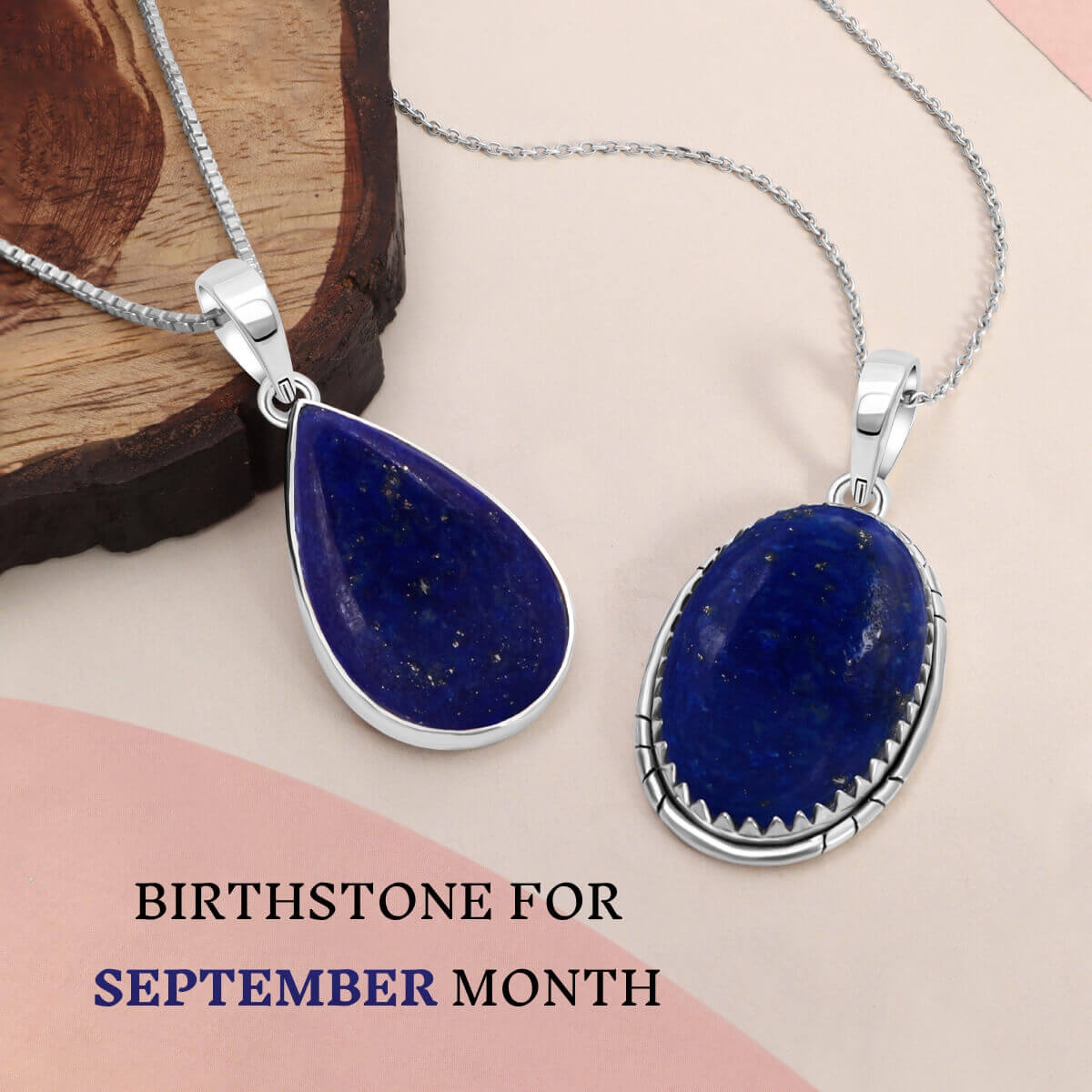 The gem Lapis Lazuli was present in the antiques of the old civilizations of Mesopotamia, Egypt, China, and Greece. In Europe, people used it to make ultramarine, an exclusive pigment that does not get withered over time even after prolonged exposure to sunlight.

From a healing perspective wearing Lapis Lazuli Jewelry will improve your relationships by welcoming honesty and friendship. From a health perspective, it cures headaches and enhances fertility. 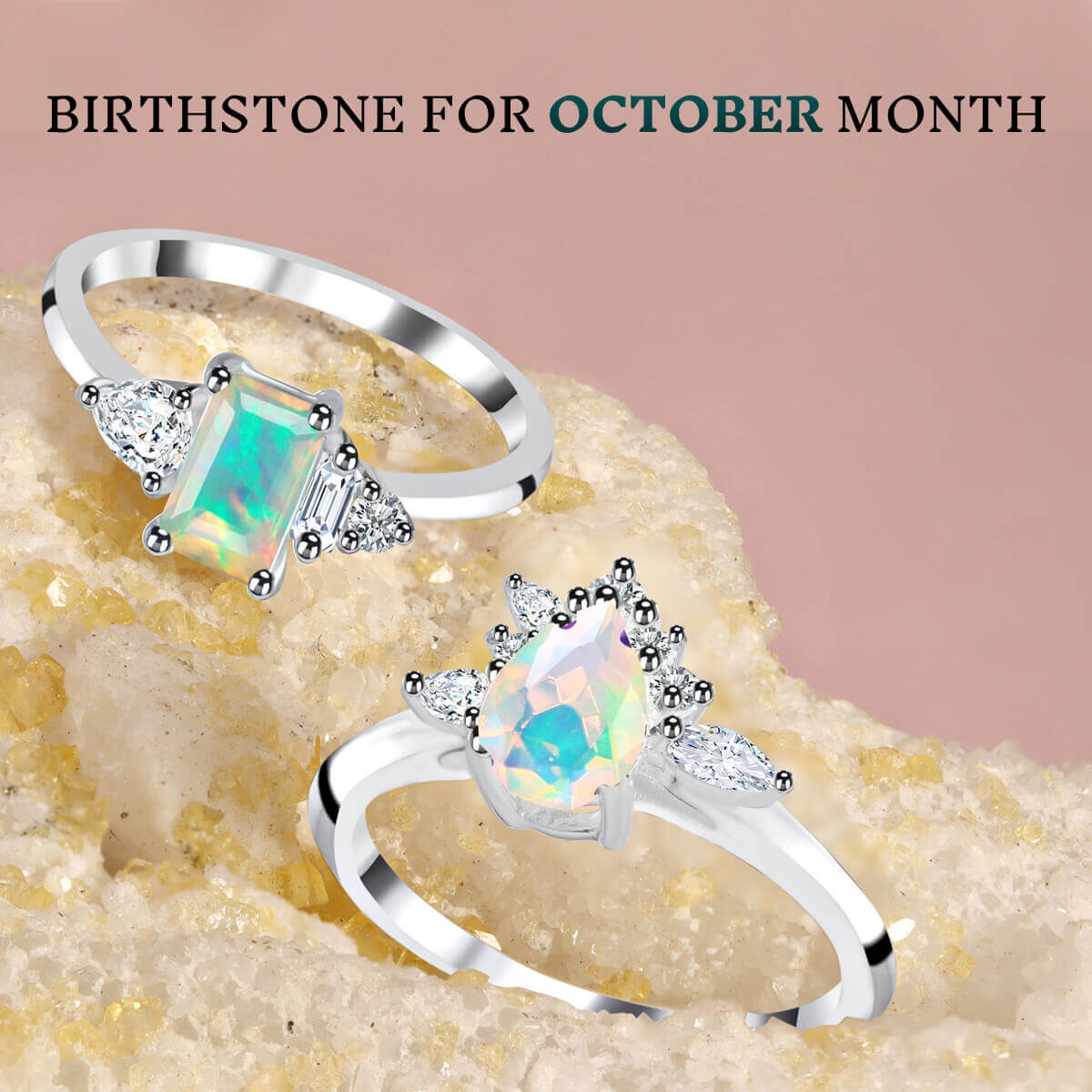 The magnetic presence of varied colors makes Opal gem a desirable October birthstone. In addition, it looks tantalizing due to the light reflection of rainbow colors.

Individuals born in October month must wear Opal Ring to live a lavish lifestyle, good fortune, and blissful married life. As per the thought, white Opal possesses; the attributes of all colored gems due to its capability to reflect all of them under varied lighting conditions.

Tourmaline is another birthstone for October. Its name evolved from the Sinhalese word 'toramalli,' which means stones of colors or colorful stone. 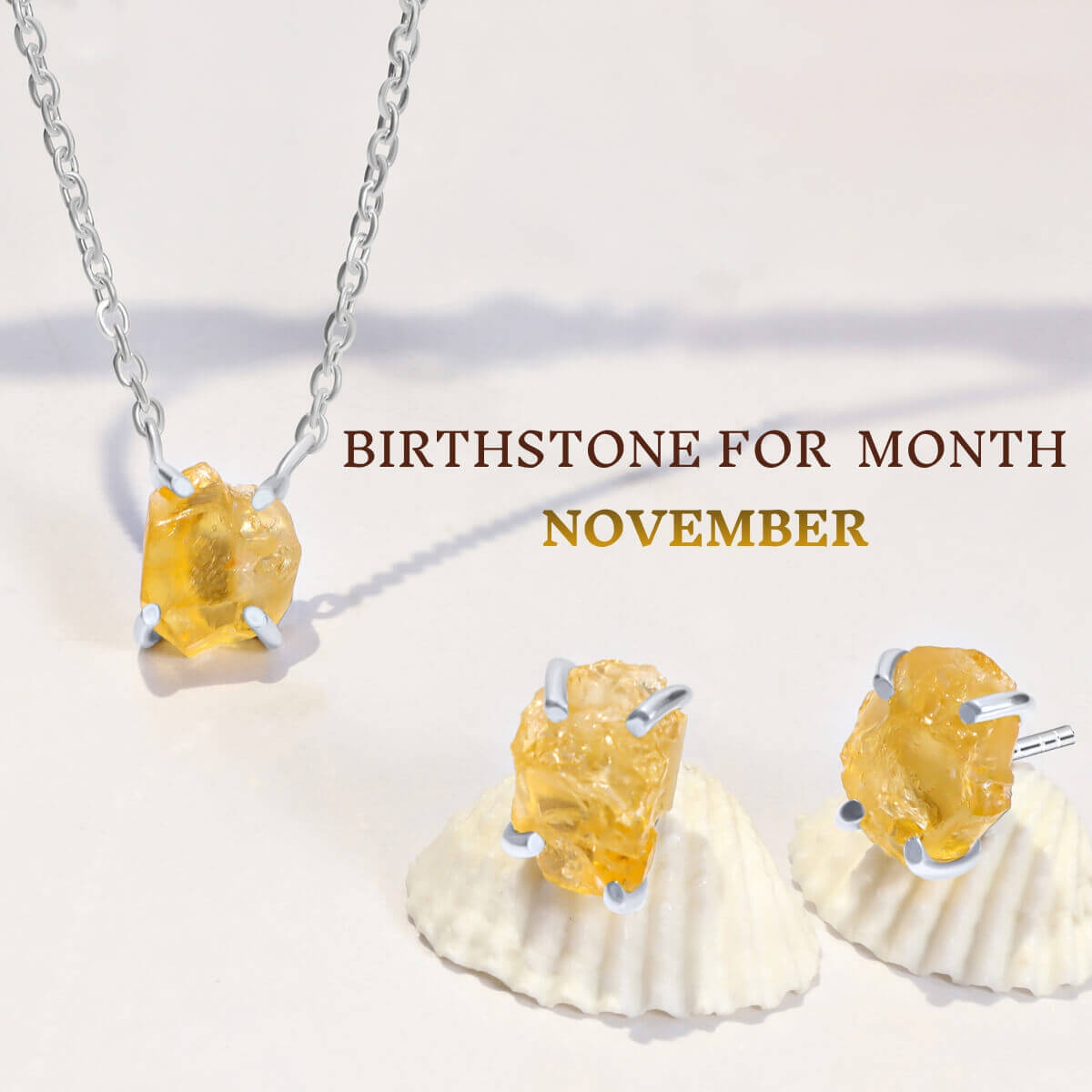 All November borns can explore some things about their personality by wearing beautiful birthstones, Citrine and Topaz. The Topaz birthstone comes in many colors.

Citrine, on the other side, has shades of orange and yellow. Topaz gem displays a variety of astonishing shades. This gem is known as the representative of the Egyptian Sun God Ra, with its stunning shine and sizzling power.

The Citrine Birthstone has mild attributes of males like peace, loyalty, originality, and healing. Both Topaz and Citrine look damn fashionable and exquisite when worn in the form of jewelry. 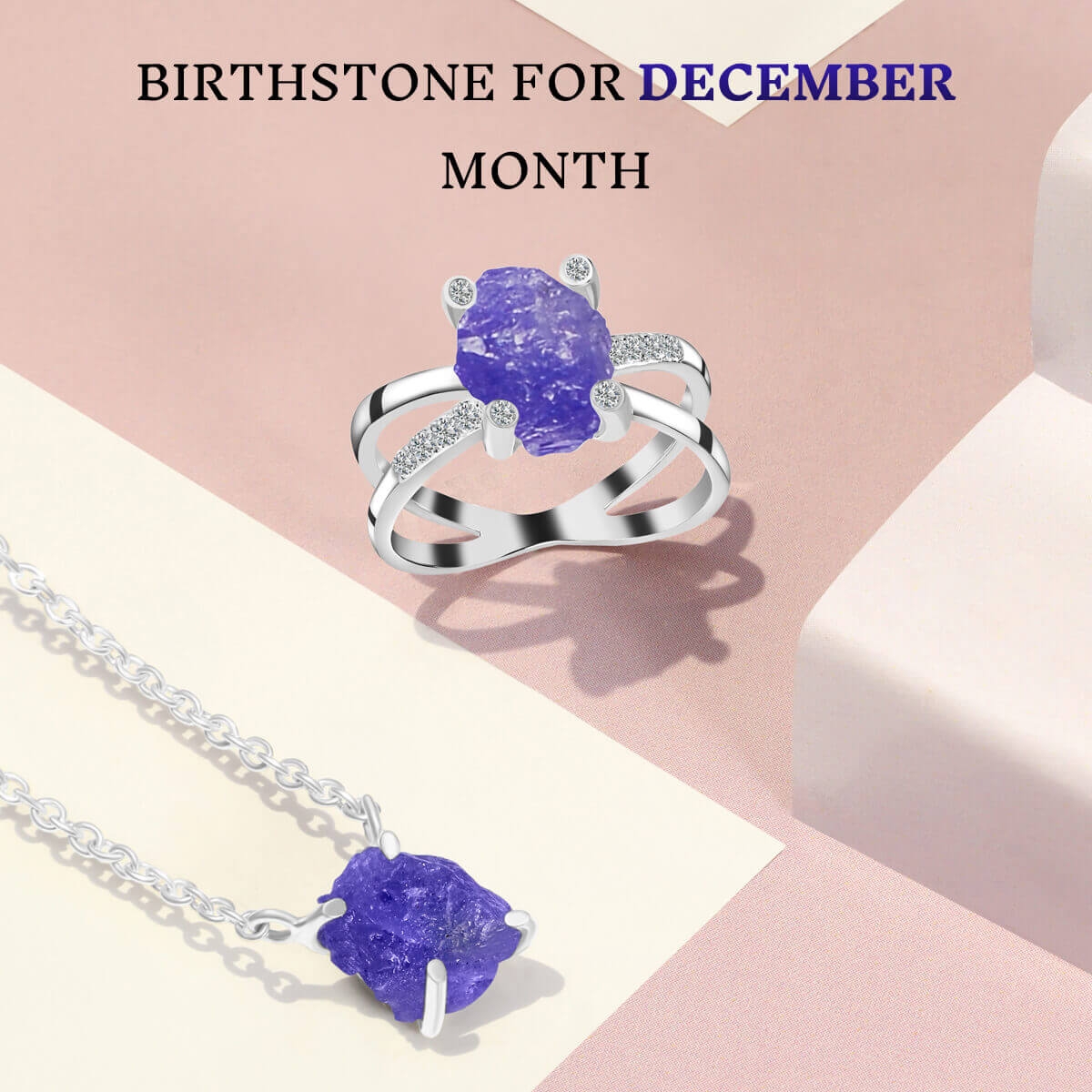 All December-born individuals must pay attention to their birthstones, namely Turquoise and Tanzanite. The Turquoise is a protective gem that is blue.

Another exclusive, eternal and sensational gem is the Tanzanite December birthstone. It offers its owner a unique path to the spiritual world. Every gem has its uniqueness and astrological relevance, which is crucial for you to know to choose wisely as per your birthday month.

Sagacia Jewelry is a newly launched Gemstone Jewelry brand based out of Jaipur, India. We believe in offering premium quality products and professional services to all our valuable clients. Keeping it in mind, we design and sell pure 925 Sterling Silver Jewelry directly to all consumers.

We cater to meet the holistic demands of all our clients by creating exquisite silver gemstone ornaments that are surely going to captivate your intellect. In addition, one can also order us to make customized gemstone jewelry at reasonable prices. Please go through our charming online collection of jewelry designs.